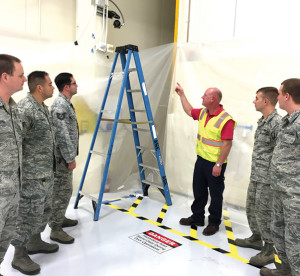 Judy Biddle, hangar fire suppression subject matter specialist at the Air Force Civil Engineer Center at Tyndall AFB, Florida, has been developing standardized checklist to be followed for all future acceptance tests around the world.

The standardized project acceptance checklist effort began after it was discovered that the hangar fire suppression acceptance testing process differed depending on the fire protection engineer overseeing the test. There was no uniformity even within agencies.

“In order to provide a more reliable fire suppression system and reduce or eliminate false activations, we need both oversight and consistency,” Biddle said.

The visit also included joint services FPE working group meetings for standardizing the checklist, providing training and moving forward to bring uniformity across the services on hangar fire suppression systems. FPEs from the Air Force, Air National Guard, Navy, Army Corps of Engineers and industry participated to make this an educational experience of benefit across the Air Force enterprise, as well as influence future industry standards.

“This was one of the most thorough tests I have witnessed and I am positive I know exactly what to look for on future tests,” said Ridgeway. “The live propane pan fires to test the new triple IR detectors were an interesting revision from the jet fuel pan fires used previously. This was also an ‘out of the norm’ hangar addition that connected two systems into one and Ms. Biddle’s system determinations were extremely valuable.”