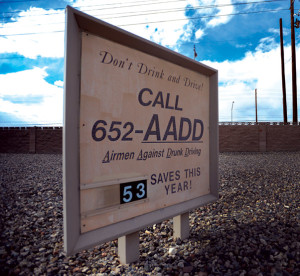 A sign reminds Airmen not to drink and drive as they leave Nellis Air Force Base, Nev. Airmen Against Drunk Driving has prevented 53 DUI’s so far this year.

NELLIS AIR FORCE BASE, Nev. — Every April since 1987, the National Council on Alcoholism and Drug Dependence has sponsored Alcohol Awareness Month to reduce the stigma that is often coupled with alcoholism.

Founded and sponsored by the NCADD, the month reaches out to American communities across the country to spread information about alcohol, alcoholism and recovery.

With the NCADD mission of spreading information, Alcohol Awareness Month serves as an important medium for increasing knowledge on the nation’s number one health problem and also the programs organized for those safely consuming it.

“Abuse of alcohol is an issue for the military and nation because of the effects it has on the body,” said Tech. Sgt. Shayla Kelly, U.S. Air Force Thunderbird Command Section flight chief and Airmen Against Drunk Driving scheduler. “It destroys the liver, it affects ones cognitive abilities, and people typically tend to abuse it as opposed to enjoying an occasional drink.”

According to the NCADD, of the addictive substances that are used in the United States alcohol is the most common. Along with the several million individuals that portray binge drinking patterns, there are 17.6 million people, or one in 12 adults, that suffer from alcohol abuse.

Annually there are 88,000 deaths that can be directly linked to the excessive use of alcohol. Being the third leading lifestyle cause of death, alcohol consumption incidents can be credited with nearly 40 percent of all hospital beds in the U.S.

“The Air Force expects its members to adhere to the law in regards to not consuming alcohol if you are under the age of 21 years old, or providing alcohol to minor,” said Kelly.

For those who are not 21 years old, the Air Force has a strict “zero-tolerance” policy toward underage consumption. Those who are over 21 and wish to participate in the consumption of alcohol are highly encouraged to drink responsibly and have a plan.

“You don’t want to be stuck in that situation where you’re using your bad judgment as intoxicated to drive,” said Weaver. “Which you should never make that decision to drink and drive, but when you’re intoxicated your judgement is impaired and when you don’t have a plan you’re more likely to take that route.”

One of the most important aspects of having a plan and being responsible is having a suitable means of transportation. This part of the plan is made easier by an organization offered to all Airmen who are unable to find a designated driver: Airmen Against Drunk Driving.

“AADD offers a safe ride home, not to another party,” said Weaver. “I tell that to the First Term Airmen Center students, that this is a backup plan not your first plan.”

From 11 p.m. to 4 a.m., after a night out if an Airman doesn’t have a way home they can call 702-652-AADD and another volunteer Airman will come pick them up free of charge.

“Our program is solely based on volunteers, if we don’t get volunteers we can’t do the shift, simple as that,” said Weaver. “Our program is also based on anonymity; we do not discuss or divulge info to chain of command or first sergeant that could possibly hurt an Airman’s career.”

While AADD is a free and anonymous program, Airmen should keep in mind that it is a last resort and should not be used in substitute for planning a designated driver.

Since AADD is available to Airmen as a last resort, drinking safely becomes an easily accomplished task even if all other plans fall through, and with April being alcohol awareness month it is vital that Airmen know the options available to them.