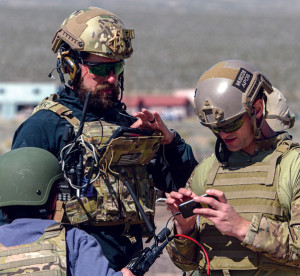 A civilian contractor and a joint terminal attack controller use the Hand Held Link 16, which enables digitally aided close air support integration during the operational assessment of the HHL16 radio March 24, on the Nevada Test and Training Range. Link 16 was originally designed for air-to-air missions, but the technology has made the transition to ground forces providing JTACs advantages on the battlefield that they didn’t previously have.

NELLIS AIR FORCE BASE, Nev. — Special Operations Command, Department of Defense components and members from the U.S. Navy, Army, Marines and Air Force took part in the operational assessment of the Hand Held Link 16 radio produced by ViaSat, March 21-25, 2016, on the Nevada Test and Training Range.

This operational assessment is the first of many that the new HHL16 radio will undergo during its improvement periods.

“The HHL16 radio is in the early stages of development,” said Waters. “We are testing an extremely capable device that has been manufactured in a very short time frame. What we have seen so far with the testing has been extremely valuable and useful for both JTACs and fighter aircraft.’

“The ability to have a portable radio that can transmit messages onto the Link 16 network is crucial for the future of conducting close air support in the 21st century. We have always wanted a standardized, secure method to implement digitally aided CAS and this tool will give us that capability.”

The operational assessment of the HHL16 and the data collected during the assessment will help with the development and timely integration of the device.

“It is crucial that we integrate as early as possible with the organizations and companies that manufacture the battlefield systems we utilize in the military,” said Waters. “Early involvement provides the developers the insight they need to make the systems more practical for the warfighter.”

Staff Sgt. Edward Wambolt, 422nd Test and Evaluation Squadron lead joint terminal attack controller instructor stated the data collected during the operational assessment will provide developers valuable information needed to work on some of the shortfalls found within the radio itself and help improve the device. There will be a couple more operational assessments and the HHL16 is expected to be deployed into to the operating community around March of 2017.

The Link 16 was originally designed for air-to-air missions, but the technology has made the transition to ground forces, providing JTACs advantages on the battlefield that they didn’t previously have.

“Increasing situational awareness on the battlefield takes a significant amount of voice communication between air and ground parties,” said Wambolt. “The advantage of having a tactical data link is that it enables digitally aided CAS integration, facilitating timely successful air power in support of the ground force commander.”

According to Wambolt, the radio is going to be forward deployed, passed the frontline of troops, something that they haven’t been able to do in the past.

“Being able to put this radio on an operator down range is going to allow that operator, connected to the Link, to reach back and build situational awareness with his pilot while he is on the air base and is getting ready to take-off to support that JTAC in his area of operation,” said Wambolt. “By building this situational awareness picture of threats and targets, the Link 16 reach back will essentially provide a new capability to JTACs on the ground giving us that link umbrella that establishes situational awareness on the battlefield.”

Even though the HHL16 is still in the early stages of development, the feedback from operators has been very positive.

“This week has been very successful,” said Waters. “We have been successfully able to transmit friendly positions, targeting information, and text messages directly to fixed wing aircraft.

“Both the JTACs and the pilots agree that being able to see friendly ground positions displayed on the Link 16 network is a huge success. Also, the ability to place digital targeting information on the battlefield and transmit that data to the aircraft gives the community the integration we need for future, near-peer, adversaries.”

Once the device has been implemented operationally, the HHL16 will be a game changer for the JTAC community.

“This system will tie the JTAC community together and more importantly, standardize the JTAC toolkit, said Waters. “Link 16 is implemented in the majority of military aircraft and its usefulness has already been proven. Having a HHL16 radio will give JTACs and aircraft a common, similar, standardized and secure platform to successfully and safely execute digitally aided CAS for years to come.”