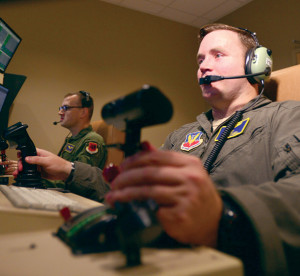 Capt. Jonathan, 432nd Wing pilot, right, and Staff Sgt. Matthew, 432nd WG sensor operator, left, fly a training mission Oct. 13, 2015, at Creech Air Force Base, Nev. The 432nd Wing conducted 189 weapon strikes in July of 2015 and 249 in August, setting a record for the number of strikes in a month in support of Operation Inherent Resolve.

CREECH AIR FORCE BASE, Nev. — The aircraft is ready to fly, the ground control stations (GCS) are up and running, and the crews have been briefed. Now, it’s time to fly the remotely piloted aircraft.

The pilot, sensor operator, and mission intelligence coordinator (MIC) step into the GCS to prepare for flight, but they’re not alone; they are joined by other Airmen, each in their respective locations.

With the engines whirring up to speed, the launch and recovery element (LRE) crew begins launch procedures for aircraft takeoff from the area of responsibility downrange.

“The launch and recovery element is responsible for conducting the launches and recoveries of the MQ-1B and MQ-9 aircraft,” said Tech. Sgt. Kory, 432nd Wing/432nd Air Expeditionary Wing NCO in charge, commander’s action group. “The LRE is located within range for C-band line-of-sight to conduct its operations in the traffic pattern, terminal area, and on the airfield. The LRE is responsible to power-up the aircraft Ku-band satellite terminal and hand the aircraft over to the mission control element (MCE) crew.”

Aided by line-of-sight ground data terminals downrange, which are maintained by the 432nd Aircraft Communications Maintenance Squadron, the LRE crew launches the aircraft and climbs to an altitude where they hand-off control of the aircraft off to the MCE located stateside, via satellite links.
“During the hand-off of the aircraft, ACMS maintainers in the GCS enable and ensure a good Ku link to the MCE crews,” said Senior Airman Robert, 432nd ACMS training monitor. 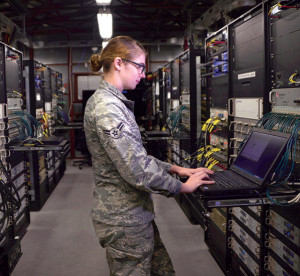 After the hand-off the MCE crew will fly the aircraft and carry out the mission, in of the specified mission areas; intelligence, surveillance, and reconnaissance (ISR), close-air support (CAS), air interdiction, combat search and rescue (CSAR), or strike coordination and reconnaissance (SCAR).
“RPAs allow us to not only conduct ISR and CAS, but also buddy lase for other assets, perform convoy and raid overwatch and even provide humanitarian support,” said Maj. Patrick, 432nd Wing chief of combat plans. “The versatility of these aircraft give the supported commander a variety of options.”

While the pilot is busy flying the aircraft and the sensor operator is operating the multi-spectral targeting system (MTS ball), the mission coordinator is also engaged by providing real-time intelligence.

“During the mission MICs are coordinating with the supporting unit and liaising between the crew and the unit because they’re not flying the plane or operating the sensor [MTS Ball],” said Senior Airman Aaron, 432nd WG/432nd AEW intelligence evaluator. “They’re looking for changes in terrain, weather, threats, and weapons systems because intelligence personnel can provide everything real time to the pilot and sensor.”

Also supporting the crew is the distributed ground system (DGS), a group of imagery analysts who watch the live feed coming from the RPA. They are able to determine the difference between a woman holding a child and a man holding a gun on zoomed-in images.

Mission taskings given by are the air operations centers (AOC) under the respective combatant commands. The AOC determines where the aircraft will go, what mission is needed, and also give orders and guidance should the need for change occur.

The wing operations center (WOC) acts as a central hub for critical mission support to the aircrew to accomplish the tasking orders from the AOC.
“The main job of the WOC is to take care of the guys flying the mission to ensure mission success,” said Maj. Steven, 432nd WG/432nd AEW WOC deputy director. “In the WOC we’re making sure crews are available, the weather is good, and planes can take off and fly with no problems, basically we’re monitoring all the factors so the mission can go smoothly.” 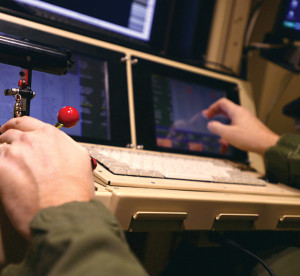 Staff Sgt. Matthew, 432nd Wing sensor operator flies a training mission Oct. 13, 2015, at Creech Air Force Base, Nev. The 432nd Wing set a record of weapon strikes in July of 2015, and then again in August helping countless U.S. and coalition forces return home to their families.

During the mission, if a strike is needed, a joint terminal attack controller can radio MQ-1 or MQ-9 crews for help to coordinate an attack on enemy forces.

“Partnering two different capabilities from the air and ground provides us with the ability to develop patterns of life for targets,” said a JTAC assigned to Air Force Special Operations Command.  “If and when the time comes to strike, we can do so with accuracy. This is instrumental in moving to a safer military for future conflicts. Not to mention, having the RPAs provide overwatch from the sky makes us feel safer as well.”

Supporting service members on the ground has been a frequent use for the MQ-1 and MQ-9 community in recent years. In some instances, MQ-1 and MQ-9s are able to track high value targets at night using an invisible infrared laser which helps designate and illuminate targets for our ground forces.

If the need for a strike arises, the crew is prepared at a moment’s notice with precision accuracy.

Not only can RPAs strike static targets, but also because of the high loitering time, moving targets as well.

Because a CAP is flown on a continuous basis, 24 hours a day, seven days a week, 365 days a year, revolving shifts of Airmen in every career field rotate throughout the CAP before the plane is landed and another one takes its place. 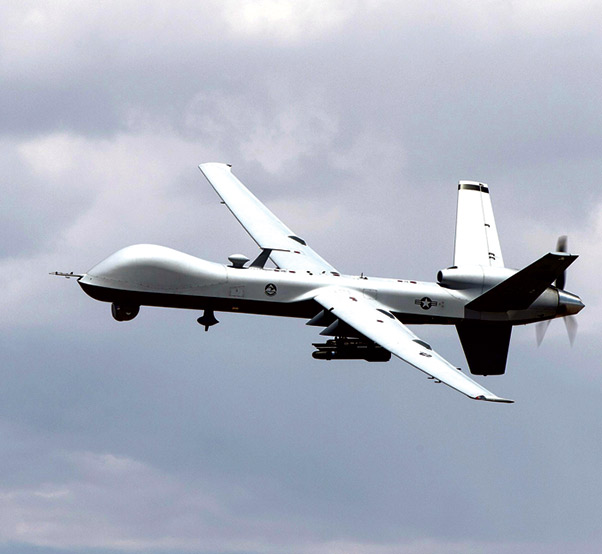 After the mission is completed and the plane is ready to land, the MCE crew will fly back to base, handing the aircraft back to the LR crew for landing.

The mission may be done, but the work isn’t, just yet. For now, the crews have kept friendly forces safe for another day.

“What our remotely piloted aircraft professionals are doing in today’s fight and in preparing for future conflicts is simply incredible,” said General Hawk Carlisle, Air Combat Command commander. “RPAs and their operators are in the highest demand from our Combatant Commanders because of the situational awareness and strike capabilities that they enable. Despite being some of the newest weapon systems in the Air Force inventory, RPAs fulfill critical demands in every theater 24 hours a day, 365 days a year.”

Editor’s note: The last names of certain individuals in this story have been removed for security reasons.