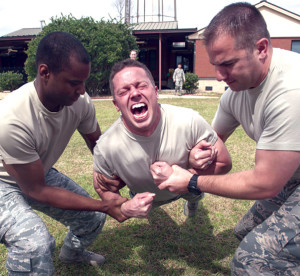 Airman Daniel Snider, 23d Wing Public Affairs photojournalist, center, shouts as he is lowered after being shocked by a Taser, March 11 at Moody Air Force Base, Ga. Snider participated in a Taser course hosted by the 23d Security Forces Squadron.

MOODY AIR FORCE BASE, Ga. — “Taser, Taser, Taser,” is all I heard moments before suffering the worst pain I’ve ever put my body through. Instantly, 50,000 volts of electricity surged from one prong touching my shoulder, through my torso, and to the other prong placed at the back of my hip.

I was completely incapacitated. I was mentally aware of the fact that my wingmen were gently laying me down on my stomach, but physically I felt as if I was on my tip-toes and about to fall flat on my back while a pulsing blade cut through my insides.

After it was done, all I said was, “that was awful.”

I didn’t think it could get any worse, but only a few minutes later I would be introduced to oleoresin capsicum spray, the law enforcement equivalent to pepper spray. Nothing could have prepared me for the burning sensation OC spray presents.

At first, it was only a cold liquid, but within moments, it felt like a fire raging on the surface of my face. It didn’t take long at all for my eyes to be nearly swollen shut. For the next hour I paced up and down a sidewalk blinking as much as possible hoping my tears would cleanse the pain from my eyes.

After washing my face with dish soap and resting for a few hours, the discomfort was reduced to that of a severe sunburn.

Unlike most people I’ve talked to, I actually prefer the OC spray to the Taser. Personally, the worst part is the complete loss of control. With the OC spray, I could strategically open my eyes and view my surroundings, but there is no amount of planning, strength or will that can beat the neuromuscular incapacitation that a Taser brings.

I’d be lying if I said I enjoyed these experiences, but it’d also be inaccurate to say I regret them.

I did it because I set a goal to prove to myself that I was tough enough to withstand these less-than-lethal methods security forces use to subdue suspected criminals. I thought, “If they can endure it during their training, so can I.” 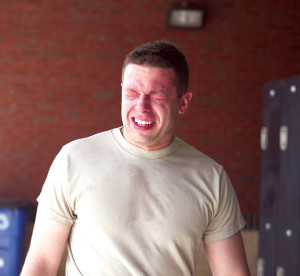 Airman Daniel Snider, 23d Wing Public Affairs photojournalist, paces after getting sprayed with oleoresin capsicum spray, March 11 at Moody Air Force Base, Ga. After being shocked with a Taser, Snider volunteered to be sprayed with OC spray, the law enforcement equivalent to pepper spray.

I’ve always worked hard to be a man of my word. So once I verbalized my goal to my peers, I was accountable for completing it. I believe one can never truly find his limits unless he constantly tests himself.

Even when I’m nervous or afraid I keep on pushing myself; but the double-edged sword is that I will never be good enough for me. I constantly attempt to outdo myself, whether it is mentally, physically, spiritually or socially.

On one hand, I’m always setting goals and working to prove to myself that I can do better, and do, in fact, continue to better myself. But on the other hand, I never feel satisfied with the completion of those goals. I always feel like I can do more.

Often times, people set goals and then get distracted by life. Family matters come along or work will draw them away. They may fall into complacency and fail to ever reach those goals. It’s important to hold yourself accountable for the goals you set and give yourself time to work towards them.
Whether it is professional or personal, always have a goal to work toward. Have something to prove to yourself or someone else.

I’m not sure where my Air Force career will go, but I can guarantee that wherever I am, whatever I’m doing, I’ll be pushing myself to be my best.