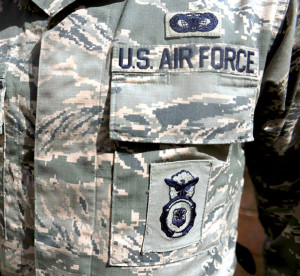 NELLIS AIR FORCE BASE, Nev. — For the second time in three years, the 99th Security Forces Squadron at Nellis AFB has been recognized with the Air Force Outstanding Large Security Forces Unit Award. Previously in 2013, and once again in 2015.

“The award showcases and highlights the accomplishments of the unit throughout the year,” said Senior Airman Anthony Flynn, a security forces leader. “The award recognizes our diligence and efficiency at performing day to day operations. Our job is to ensure our force is safe to perform their duties in order to enable airpower. Without a dedicated defense force, planes can’t fly and the functions of the military can’t be carried out.”

“This award is a reflection of what we have done collectively,” said Staff Sgt. Brian Zarrella, 99th SFS NCO in charge of confinement. “Everyone in the unit has their own specialties and section. Regardless, we manage to come together as one to accomplish the mission. This award is the result of our work as one solid unit”

“Security forces is made of so many smaller parts that it’s hard to see what we do until you put it all together, and once you see it, you’ll understand it’s significance.” said Tech. Sgt. Christopher Hinds, 99th SFS kennel master.

The 99th SFS has a multifaceted mission, to include flight-line Security, Police Services, Military Working Dog program, Antiterrorism and force protection, among others.

“Basically the award is broken down into large, medium, and small unit types,” said Staff Sgt. Corey Terrell, 99th SFS base defense operations center controller. “Of all the large units, we have proven to be the best one, which gives us an enormous sense of pride.”

“Given this is the second time the Air Force recognizes our unit in the last three years, it shows we continually manage to do great things,” said Zarrella.

“Our leadership is very engaged” said Zarrella. “They truly exemplifies mission commitment. They work hard toward maintaining an adaptive and mission-ready force though discipline and by establishing high standards for our Airmen.”

Along with the guidance from their leadership, the 99th SFS also attributes the award to the quality of their training, dedicated Airmen and exploring innovative ideas to enhance integrated base defense.

“There’s a lot of Airmen that do a lot of remarkable work on day-to-day operations,” said Flynn. “I like the flight I work on, and I enjoy coming to work because I feel it’s a great environment. Everyone is knowledgeable, and we stick together like family.”

“Part of our unit’s success is our Airmen’s sense of pride and comradery”, said Zarrella.

Through their actions and accomplishments, the 99th SFS demonstrated they are leaders when it comes to supporting the foundation of airpower and their commitment to, as captured in their motto, “Protect, Defend and Fight … HUA!”