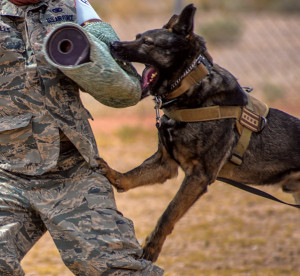 ‘PJ’, a military working dog assigned to the 99th Security Forces Squadron, bites down on a padded arm sleeve during a demonstration at Nellis Air Force Base, Nev. April 7. The MWDs go through training just as intense as what the handler goes through during their own 55 day training course.

NELLIS AIR FORCE BASE, Nev.—To say that a strong bond between a military working dog and their handler is crucial is an understatement, particularly in a career field where the dog and the handler rely heavily upon each other in high pressure and potentially dangerous situations.

The relationship between MWD and handler requires a greatly heightened level of communication and understanding than normally found throughout the Air Force.

“When you look at a demonstration, it shows the capabilities and obedience of our dogs and also serves as a dual purpose as the public gets to see and understand that our dogs do bite and they do attack,” said Tech. Sgt. Christopher Hinds, 99th SFS kennel master. “It serves as a natural deterrent.”

While demonstrations serve as a good way to display and inform the public of the capabilities of MWDs, they only highlight a very small portion of their mission and capabilities of the handler and the dog.

“Primarily, our mission is to provide capabilities for narcotic and explosive detection as well as patrol work.” said Hinds.

Due to the high risk nature of their mission there is no room for mistakes, which is why the handler and dog go through rigorous training at Joint Base San Antonio-Lackland before becoming operational. 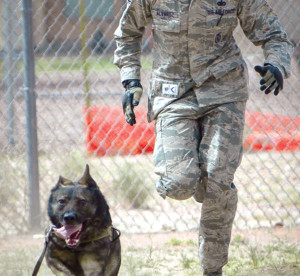 Staff Sgt. Adrian Alvarez, 99th Security Forces Squadron military working dog handler, runs with ‘PJ’, 99th SFS military working dog, during a MWD demonstration at Nellis Air Force Base, Nev., April 7. While demonstrations serve as a good way to display and inform the public of the capabilities of MWDs, they only highlight a very small portion of their mission and capabilities of the handler and the dog.

“The handlers go through a 55-day training course,” said Hinds. “There they will learn all the basic functions of the medical portion from how to treat a dog to some basic advance medical. They will learn how to control the dog through the patrol training, which includes the bite work, obedience and marching.

“Next, they will go through the detection portion. During this portion, the handler will learn how to work a dog and how to actually find the odors and learn what the dogs do when they react to the odor.”

The MWDs go through training just as intense as what the handler goes through during the training course.

“The dog itself is on a 120-day timetable where they have to learn how to do detection,” said Hinds. “Typically, the training is broken in half, 60 days of detection and 60 days of the patrol work, bite work and obedience. The dog will then go through formal certifications and if they pass the certifications they will be assigned to a base.”

“You will never have a dog that does both as far as narcotics and explosiveness,” said Alvarez. “The reason being is if the dog were to sit the handler wouldn’t know if it had detected a bomb, explosive or drugs. You will find a dog that is narcotic and patrol or explosive detection and patrol but never explosive and narcotic detection.”

After the dog passes their certifications, they have to wait anywhere from 15 to 60 days before they are stationed at their new base.

“Once at the base, it’s kind of a little reset for the dog,” said Hinds. “We teach the dog a little bit more of the basic tasks and make sure that they remember it because just like a human if you don’t practice something you will forgot. So we spin the dog back up and get them to what we associate as a three-level.

“From there, a team will certify within 60 days and once they meet the certification standards that’s when they get into more of the advanced work.”
It is also during this time that the crucial relationship between handler and dog starts to form. It is a relationship built on trust as both the handler and dog depend on each other.

“The relationship between a handler and his dog is awesome,” said Alvarez. “It’s almost like your own kid. You work like a team; without you the dog can’t do its job and vice versa. You grow that bond and it’s hard to sometimes remember that the dog is a military working dog and not yours because the bond is so strong.

“At the end of the day your dog is a reflection of you. If your dog is out there kicking butt and doing what is has to do, it shows that the handler knows what he is doing. If not, it’s a negative reflection on the handler. You complement each other.”

“There is no machine that can replace what a dog does,” said Hinds. “The only thing the dog can lose is proficiency. We do so much training with them we are able detect that before it ever becomes an issue in the field. A dog is better than a machine any day of the week and they are loyal.”

The constant training coupled with the unique bond between handler and dog is what allows the 99th SFS military working dog unit to be mission ready and consistently perform at the highest level.