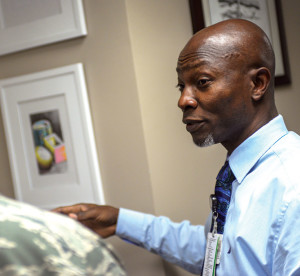 Dr. Cyclopea Anakwa, 99th Medical Operations Squadron internal medicine doctor, describes his artwork to an airman at the Mike O’Callaghan Federal Medical Center during his “An Art of An Art” exhibit at Nellis Air Force Base, Nev., April 21. The artwork hanging in internal not only serves as aesthetic images to look at while walking the halls, but it also serves as a way to better connect with patients.

NELLIS AIR FORCE BASE, Nev. — Walking through the halls of the Mike O’Callaghan Federal Hospital, Dr. Cyclopea Anakwa, a civilian internal medicine doctor assigned to the 99th Medical Operations Squadron, notices a patient sitting quietly, and begins to have a conversation with her.

As the conversation progresses, Anakwa’s heart sinks as he realizes that there is nothing he can do for her. The patient explains that she has terminal cancer, and has come to the hospital to receive treatment from her doctors.

While Anakwa couldn’t do anything to assist her medically, he realized that he may posses a way to help the patient. After the woman, who wasn’t even his assigned patient, told Anakwa that she had a dog, the doctor began to draw her a portrait of her pet.

The woman’s face lit up, and while her terminal disease was no closer to being cured, the image from Anakwa drawing helped bring her a shred of happiness in a dark time.

The internal medicine section of the Mike O’Callaghan Federal Hospital held an art exhibition, “An Art of an Art,” containing 10 years of Anakwa’s work, but not only is this artwork used for display, the doctor uses his art as an integral tool for communicating with patients.

Since his adolescence and growing up in Ghana, art has played a role in Anakwa’s life.

“I started painting, my father was teaching me,” said Anakwa. “I was 16 and painting in black and white. Then all of a sudden, I gave up painting and started using pen.”

Through his childhood, it became apparent that Anakwa life contains two passions: science and art. From his adolescence to schooling, Anakwa found a way to fuse the two together.

“When I was in high school, I did science,” said Anakwa. “Normally a science student wouldn’t do art, but I added art as an additional subject and I did very well in it. So when I went to college, some of the guys from high school who did art were there with me doing art and I tagged along with them.”

Once Anakwa came to the United States to complete his residency, his art was put on hold while he spent most of his time studying and practicing at St. Anges Hospital, Baltimore. Though he had taken a break from art, it was not to be permanent.

“When I graduated in medicine and came to the United States in 2001, I did my residency from 2001-2004 in Baltimore at St. Agnes hospital,” said Anakwa. ”During that time I didn’t do much artwork. But after that when I first worked in Nevada, in a small town called Overton, I started doing the drawings again, and the first one I drew was the hippo.”

This Hippo, drawn in black and white ink, hangs now in the break room of the internal medicine section of Nellis AFB. It is only one piece of the comprehensive grouping of art work on display for Anakwa’s exhibition: ‘An Art of An Art.”

“This exhibition is for a period of ten years that I’ve been in Nevada, and out of that ten years, five of it has been at Nellis,” said Anakwa. “This is a premier institution and I haven’t done an exhibition before. To have the privilege to launch my art career here at Nellis AFB is huge.”

The artwork hanging in the internal section only serves as aesthetic images to look at while walking the halls, but it also serves as a way to better connect with patients.

“It’s something out of the box, but I fully support it,” said Maj. Paul Bott, Medical Services Flight Commander, 99th MDOS. “It shows not just our coworkers, but also our patients that our physicians do other things and they have other talents. That way we can be more personal with patients and show them another side of their doctor.”

Seeing this other side to their doctor is important, especially in Anakwa’s case since he is a primary care physician at MOFMC.

“As far as being in internal medicine, he has over 800 patient empaneled to him, so he’s their primary care provider,” said Bott. “Doctor Anakwa also covers in-patient wards for us. He’s very personable and easy to talk to. His patients love him and you can tell because his clinic is always full. They’re always here and I think a lot of them make a point to just come and see him to tell him to tell the truth, he takes great care of them.”

His art not only hangs on the walls of the internal medicine section, but it serves a vital role in Anakwa’s day-to-day interactions with patients.

“On a daily basis, I’m quick to explain to my patients, without grabbing a book, ‘these are you lungs, we think that is something here on the right side,’” said Anakwa. “For example, diabetic teachings. When I finish through everything the diagrams I give them depicting refined sugar, unrefined foods, carbohydrates, and some of them will rip them off and ask me to sign them.”

The art serves an important role in communicating with patients, serving as easily digestible diagrams that patients can understand quickly.

Anakwa’s art ranges from that which helps patients easily understand their conditions to his art that is used for decoration and discussion, Anakwa maintains a firm philosophy for art pieces.

“It’s one thing to have an art piece that you drew and not show it to anyone. I don’t see the use of that art piece, you didn’t give it to anyone or show it to anyone you just finished the artwork and kept it the closet. That is not art, art is an idea and a passion, but it always has to be shared, even if it’s only shared with one person. The person who bought it or the person you gave it to, that person is going to share it and it will continue on being shared.”

It is with this concept in mind that Anakwa is holding his first art exhibition, ‘An Art of An Art,’ at Nellis AFB in the MOFMC.