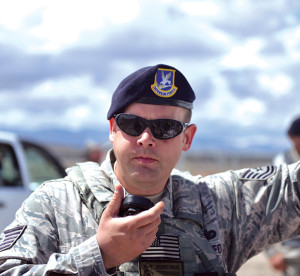 CREECH AIR FORCE BASE, Nev. — Planning, maintaining, and executing the remotely piloted MQ-1 Predator and MQ-9 Reaper mission has proved to be a time and labor intensive process, yet there are still Airmen’s stories to be told.

Behind the scenes, Airmen from many supporting career fields bring their skills together to collectively accomplish the mission as one cohesive RPA enterprise.

From the defenders at the gate to the defenders at the Base Defense Operations Center, security forces Airmen protect Creech Air Force Base, 24/7/365 days a year. In turn, they safeguard very effective weapons systems and the Airmen who operate, maintain, and support it.

The facilities these Airmen operate out of don’t just appear…civil engineering and RED HORSE squadrons construct and maintain the buildings.
In addition to the need for operating space, Airmen need the assistance of the Host Aviation Resource Management office which maintains the records of each aviator’s flight history ensuring they are physically and physiologically qualified to fly. 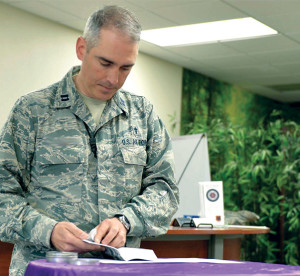 Like any other base, Airmen from various medical career fields provide treatment to keep Airmen in the fight, finance personnel ensure Airmen are paid, and personnel Airmen ensure career records are up to date.

Supporting the networks used to keep information safe is the 799th Air Base Squadron communication flight.

“We maintain the networks our operators use in support of U.S. and coalition missions to keep boots on the ground safe,” said Staff Sgt. Benjamin, 799th ABS cyber transport. “The security we provide allows secure communication between the commanders to the Wing Operations Center, to the operators.”

Another support function of the MQ-1 and MQ-9 enterprise, is the assessing and implementation of new aircraft, weapons, software updates, and other capabilities.

The 556th Test and Evaluation Squadron members work to bring new systems and technological advances to the warfighters.

“At the 556th TES, we develop, test, evaluate, and deliver effective and sustainable RPAs and combat capabilities to meet current and future warfighter requirements at the tactical and strategic levels,” said Maj. David, 556th TES director of operations.

David went on to say with the way the threat environment changes, it’s important to stay ahead of the curve by having the most advanced systems available.

“Once the acquisition team acquires a new system, is must be tested by Air Force Material Command, and later operationally tested by the 53rd Wing to ensure they are effective and suitable in the intended operational environments,” he said.

The 556th TES also provides training for all the new developments and systems to qualify combat aircrew before they are employed downrange.
When it comes to supporting the enterprise on a personal level, the Human Performance Team (HPT), which consists of an operational psychologist, operational physiologist, chaplain team, and physician to take care of the Airmen physically, socially, spiritually, intellectually, and emotionally. 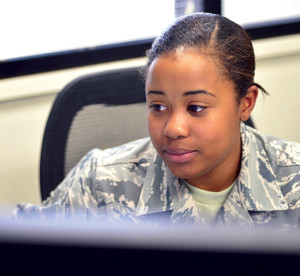 To reach Airmen, each member of the HPT attains the proper security clearances that allows them unrestricted access to the Airmen performing RPA operations.

“Outside of the special operations community we are a unique asset,” he said. “Just like the [MQ-1 and MQ-9] community standing up to support the combatant commanders, we’ve stood up to meet the needs of those supporting those who support the commanders.”

Experiencing the Airmen’s jobs firsthand and the partnership within the group allows the HPT to solving any problems in any possible way.

With every agency working together, the MQ-1 and MQ-9 enterprise is brought together and makes it an integral piece of the most sophisticated and effective Air Force in the world.

“What our Remotely Piloted Aircraft professionals are doing in today’s fight and in preparing for future conflicts is simply incredible,” he said. “RPAs fulfill critical demands in every theater 24 hours a day, 365 days a year.”