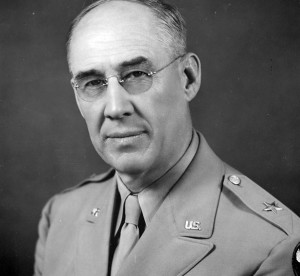 NELLIS AIR FORCE BASE, Nev. — Seventy-five years ago, with construction of what would be Las Vegas Army Air Field just underway, Lt. Col. Martinus Stenseth arrived to take command and organize the first of what would be eight Army Air Force flexible gunnery schools to provide trained gunners to a fleet of B-17 Flying Fortresses and other bombers in combat worldwide.

Except for about six months in 1943, he worked towards this mission here at Las Vegas until April 1945, rising to the rank of brigadier general. So who was this Lt. Col. Martinus Stenseth?

He was born in 1890 to immigrant Norwegian parents in the rural hamlet of Heiberg, Minnesota, which was then still almost frontier territory.
Stringing together educational opportunities where he could find them, he graduated from the Northwest School of Agriculture in Crookston, Minnesota. in fall spring 1916 and joined the 3rd Regiment, Minnesota National Guard, just in time to see service on the Mexican border that same year.

With a short break after his return, he rejoined and was sent to an officer candidate course at Fort Snelling but soon transferred to the Air Service (then part of the Signal Corps), taking his ground school on the Ohio State campus in Columbus, Ohio. He was then part of a group transferred by ship to France for flight training in French and Air Service schools.

He earned his wings and was commissioned as a 1st lieutenant on March 24, 1918, and after additional training, assigned to the 28th Aero Squadron on Aug. 28, 1918. In just 10 weeks of combat, he advanced to flight leader and recorded eight aerial victories becoming an ace. After the war, several of these actions would result in award of the Distinguished Service Cross and Silver Star.

After the end of combat, he remained in France, was promoted to captain and ultimately commanded the 28th Aero Squadron for two months before the unit returned home. He remained in Europe, assigned to work for the American Relief Administration’s Baltic Mission and serving as representative for the Food Relief Grain Corporation in Libau, Latvia, through August 1919.

As he wanted to stay in the Army and fly, he was assigned to several posts in Texas including command of the 90th Aero Squadron along the Mexican border. After commissioning as a 1st lieutenant in the Regular Army, he spent much of 1922-1926 in Iowa and Minnesota advising and overseeing training for Reserve and National Guard aviation units.

From 1926-1927, he attended the Air Corps Tactical School at Langley Field, Virginia, and was part of the welcoming reception for the Navy cruiser Memphis when Charles Lindberg returned from his flight to Paris.

He then attended the Advanced Calvary School at Fort Riley, Kansas, before a short stop at Selfridge Field, Michigan, and then staff duty in Washington, D.C., with the War Plans Section, Office of the Chief of the Air Corp and the Militia Bureau as Assistant Chief, Operations and Organization Division. He did get to fly regularly, including delivering aircraft to the Canal Zone through Mexico in 1932.

He was then posted to the Philippines where he commanded 2nd Observation Squadron, who were commended for their work surveying landing strips for use in defending the Philippines. Returning in 1936, he commanded the Air Corps Primary School Flying Detachment and later the 52th Student Squadron at Randolph Field, Texas as the expansion started in preparation for World War II. 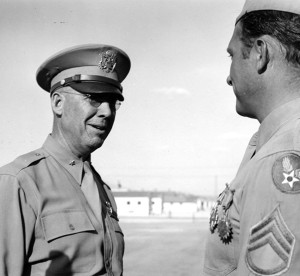 He saw the results of combat as an observer in the Baltics in May 1940, serving as assistant military attaché in Latvia and then Finland until September 1940, arriving after Latvia had been occupied by the Soviets and just after the end of the Winter War between Finland and Russia.

He returned to the U.S. for a short time at Moffett Field, California, Army Aviation’s West Coast training headquarters until he was assigned as commander for the Air Corps Gunnery School, Las Vegas, and arriving May 2, 1941. Originally, he and other key staff worked out of offices in the basement of the post office building until July when there were enough buildings at the airfield to house everyone.

Stenseth’s job was to organize a school of a type that had never existed before. He and key staff traveled to a gunnery school in Canada to see how they were training. His staff, almost all Reservists and hastily commissioned civilians, had to come up with training devices and syllabuses.

The small number of gunners needed until then were usually trained on the job and it was often secondary to being an observer or flight engineer or radio operator.

The B-17 and B-24 had gun positions for those specialties but also had gunners in the waist of the plane and in turrets or positions in the tail and underneath and later in the nose.

A B-17 had six enlisted gunners; initially with 12 B-17s in a squadron, a number growing to 18 later in the war and with four squadrons in a bomb group, that called for 288 gunners, later 432 gunners, not counting replacements for casualties. Although the number varied almost by month, by 1943, there were as many as 40 bomb groups with B-17s, not counting reconnaissance units that also flew B-17s.

With the first class graduating in January 1942 and a growing number of gunners graduated, he was promoted to colonel that same month.

Needing his organizational expertise, he was sent to Victorville, California, shortly after promotion to brigadier general in April 1943 to organize the 36th Flying Training Wing to oversee a number of the military and contractor-operated flight schools in Southern California, Arizona and southern Nevada.

He was then named as the 82nd Fighter Wing commander for flexible gunnery schools at Las Vegas as well as Kingman and Yuma, Arizona, returning to Las Vegas Army Airfield on Dec. 1, 1943. He remained here as 82nd FW commander through April 1945, when he was sent to Keflavik to command Iceland Base Command through December 1945.

By that time, Las Vegas had trained more than 55,000 gunners, mostly for B-17 duty and were well on their way to training another 3,350 gunners for the newer B-29 for combat over Japan.

After returning from Iceland for home leave, and with the post-war Army Air Forces shrinking rapidly, he reverted to colonel and was assigned to Offutt Field, Nebraska, as the 2nd Air Force Air Inspector in June 1946. Almost immediately, he was detailed to run several interview and selection boards for wartime officers wanting to stay in as Regular Army.

After these boards, he returned to Offutt Field, then moving the 2nd Air Force HQ to Fort Benjamin Harrison, Indiana, before his final assignment with the new USAF IG’s office at Kelly Field, Texas.

He retired in his highest grade held, brigadier general, effective June 1950. Never married, he then made his home here in Las Vegas, spending summers in Minnesota with his sisters and their families until he passed away June 23, 1979.

One interesting note is when the first military family housing was built at Nellis AFB in 1951, excepting the street named for Nevada Senator Pat McCarran, all other streets were named for World War I American aces but Stenseth was not so honored.

In 1980, shortly after his passing, the Base Operations Building, originally the pre-war Western Air Express passenger terminal, was named for Stenseth and remains so to this day.