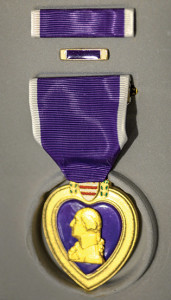 The Purple Heart was awarded to retired Staff Sgt. Julius Farrar at Nellis Air Force Base, Nev., April 28. On Aug. 7, 1782, during the Revolutionary War, General George Washington issued an order establishing the honorary badge of distinction: The Purple Heart.

NELLIS AIR FORCE BASE, Nev. — Julius Farrar’s words began to fill the auditorium and a hush engulfed the crowd that looked upon him as they listened with reverence.

Respect was apparent just by gazing around at the Airmen who now hung on Farrar’s every sentence.

As the medically retired staff sergeant began to speak of his trials during the Korean War, every Airman in the room felt the weight of what the man who was just awarded the Purple Heart has had to endure.

Julius Farrar, after six decades, was awarded the Purple Heart for injuries that he sustained during the Korean War at ceremony in his honor at Nellis AFB, April 28.

“On Aug. 7, 1782, during the revolutionary war, General George Washington issued an order establishing the honorary badge of distinction,” said Senior Master Sgt. William Joyce, 99th Communications Squadron Operations flight chief. “Later known as the decoration of the Purple Heart, one of the most recognized and respected medals awarded to members of the United States armed forces. The award of that decoration ceased with the closing of the Revolutionary War, but was revived February 22, 1932, the 200th Anniversary of George Washington’s birth. It is awarded to personnel who receive wounds in action against an armed enemy against the United States during periods of war, armed conflict, or lost their lives as a result of hostile foreign forces.”

Upon receiving the award Farrar expressed gratitude and appreciation in regards to not only receiving the accolade, but also to the crowd that came to witness the event.

“It makes me feel really good to see so many come out that are interested in an occasion like this,” said Farrar. “For something that happened so many years ago.”

Once he thanked the crowd, Farrar began to describe a portion of his experiences and his role while serving in Korea during the war.

“My last in-combat during Korea, up in the mountains, I think there was eight of us, and that was it,” said Farrar. “We had communications to the base 50 miles away. My job was to keep this transmitter working 24 hours a day, 7 days a week. So I slept about five feet from this transmitter, and that was my friend. It was my job to keep it going all the time.”

After painting a harrowing picture for his captivated audience, he recounted even more trials and tribulations that the Korean War had for the group stationed in the mountains.

“Winter-time in Korea was 30 to 35 (degrees Fahrenheit) below zero, sleeping in a canvas tent, and heated by diesel fuel,” said Farrar. “That’s all we had. There are so many things that you’d like to have, but we did without. We didn’t have fresh foods, I recall when I went to Japan on rest and recovery, I think after seven months of me there, this was the first time I had fresh milk. I think that’s all I had was fresh milk, because it was so good, but you did without a lot of stuff. We had dry foods, sea rations we called them.”

Being in those mountains during the war tested Farrar and the men he was stationed with, but even with all these obstacles the men endured. 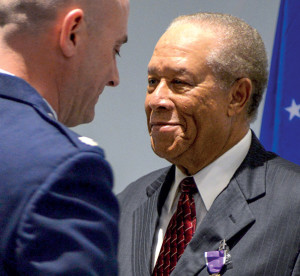 “We were out there by ourselves, but you learn to adjust with the bad food and the bad water,” said Farrar. “We lived and died together, that’s the way it had to be.”

Through this ideology, Farrar and the Airmen who served at this post endured and survived so that they could accomplish their vital mission.

“Being up in the mountains, you may think that your job was unimportant, but it wasn’t,” said Farrar. “Keeping those jets flying to the frontline, drop their load, and then go back to the base to refuel. If the signal wasn’t on the pilots wouldn’t know where the base was.”

Though an Airman 1st Class, Farrar realized early the importance of his role and the role of his fellow Airmen. While talking to the auditorium of Airmen, this is one of the messages that he hoped to emphasize.

“It’s very important, your job is important,” said Farrar. “Regardless if you’re an airman, you’re just as important as the colonel or general. We all have to work together.”

Upon conveying this message to the group of on-looking Airmen, Farrar began to talk about his childhood and what guidance made him into the man he is today.

“The main thing my father taught me was honesty, whether anyone knows about it or not, as long as your honest with yourself that’s what’s important,” said Farrar. “That keeps you at a certain standard of like, and it keeps your there the rest of your life. That’s why I’ve always been able to hold my head up, because I’ve never cheated anyone, never stolen from anyone and always been proud of who I am and tried to carry myself that way.”

As these words left his lips, Farrar took a moment to thank the crowd, once again, for sharing the moment with him.

As Farrar stepped down from the podium and walked back to his chair, he was thanked for his service and congratulated for his award by a long applause from the audience that was moved by his words of inspiration.