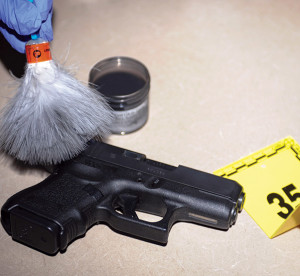 NELLIS AIR FORCE BASE, Nev. — When watching an episode of ‘Cops,’ one usually sees drug rings getting busted, people getting caught stealing a vehicle or response to a sexual assault call. With these crimes being showcased in cities around the United States, these crimes also happen on military installations.

Even though the 99th Security Forces responds to these types of crimes, the Air Force Office of Special Investigations Detachment 206, a tenant unit at Nellis AFB, handles bigger cases.

“Our mission is to investigate felony level crimes, anything that can get more than a year time in jail,” said Rivera. “It includes high dollar theft and fraud, drug ring type activities, death investigations and sexual assault. We also have another piece of our jurisdiction that covers espionage, terrorism and counter-intelligence missions to protect air force assets.”

In 2015, Detachment 206 was able to identify fraud involving pharmacies and Tricare where there was a reported $4.3 million loss to the government. In addition to this one instance, Rivera and the rest of Detachment 206 investigated 125 cases throughout the year.

With their hard work throughout 2015, the U.S. Air Force recognized the OSI members at Nellis AFB by awarding them as the best large Air Force OSI detachment of the year.

“It’s great to be recognized for our hard work,” said Special Agent William Dimonaco, member of the fraud division. “It always seems like we are busier than other detachments because there is always something going on here and it’s nice to be recognized.”

With Rivera being a part of the military for a while, she recognizes how hard it is to win these type of awards while competing with everyone else across the Air Force. 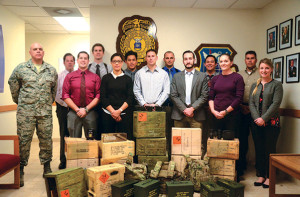 Detachment 206 stands behind seized material after successfully completing a case during 2015 at Nellis Air Force Base, Nev. During 2015, Det. 206 ran 125 cases in which they would seize stolen material, conduct busts and would receive confessions for crimes. For their actions, Det. 206 was recognized as the best large Air Force OSI detachment.

“It’s hard to win awards in this career field because everyone is so high speed and they are all doing amazing things,” said Rivera. “So to win an award amongst everyone else, is a big deal. It’s nice to be recognized for all of the hard work that everyone did because everyone in this unit puts out 100 percent effort.”

Other cases in 2015 that stood out was a recovery of $95 thousand in government ammunition and equipment as well as busting an Airman attempting to sell stolen parachutes worth over $17 thousand. For these achievements, Rivera is proud of what she does for a career.

“I love this career field because there is a lot of instant reward,” said Rivera. “You get to see a project from start from finish and you will see the results of it.”

With OSI being a career field that Airmen must cross-train into, Rivera says agents are always open to sitting down with Airmen to see if this is the career for them.

“It’s a common misconception that only security forces joins OSI,” Rivera said. “We actually found that it’s best to take Airmen from every career field because we will have a vast knowledge of the whole Air Force instead of only one area.”

Airmen interested in cross training or wanting to know more information on OSI can call 702-652-3433.