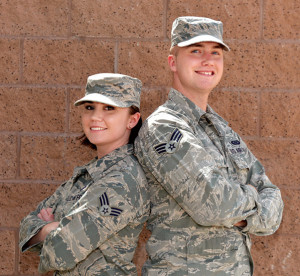 The gathering of information is made possible by the MQ-1 and MQ-9 persistent attack and reconnaissance combat missions flown from Creech AFB, Nevada, and the training is provided by Intelligence Formalized Training Unit instructors from the 432nd Operational Support Squadron.

A six-man instructor team is responsible for transforming every intelligence analyst assigned to Creech AFB into a specialist capable of performing a critical role in combat missions flown by MQ-1 Predator and MQ-9 Reaper aircrews.

“What the students learn in our course can make or break the success of every mission RPAs support,” said Capt. Ashley, 432nd OSS IFTU course director. “If the IFTU staff doesn’t provide the best instruction possible, MQ-1 and MQ-9 intelligence members won’t be ready to support combat aircrew with critical threat analysis and mission support.”

Intelligence analysts piece together data from a variety of sources in order to assess threats, plan for missions and prevent enemy attacks. Creech AFB members set the stage for persistent attack and reconnaissance intelligence training as information is constantly evolving to meet mission requirements.

“The IFTU is all fundamentals and applications based,” said Senior Airman Megan, 432nd OSS IFTU instructor. “We are reinforcing what Airmen are learning in tech school and helping them to apply it within the RPA community.”

Senior Airman Dylon, 432nd OSS IFTU instructor, said that because the MQ-1 and MQ-9 systems are so unique, courses are rewritten every two years to keep the information up to date.

“When intelligence analysts go through the mission qualification process down at the squadron level, they start building on everything we taught them and begin learning their squadron’s standards, and what is specific to their mission,” said Megan. “Because different squadrons have different and very specialized mission sets, it is very important to teach our Airmen the fundamentals needed so they can expand on it later.”

Ashley went on to say that as soon as the students graduate, they go on to become mission support analysts (MSAs) who are directly supporting combat missions.

“That’s a huge responsibility for both the students and my instructors, and there is no other intelligence job like that in the Air Force,” said Ashley. “We have an amazing instructor cadre comprised of active duty and reserve Airmen, all of whom were handpicked from their squadrons due to their talent and expertise in RPA operations. “

MSAs are relied on to calculate data and assess threats for aircrew, who use the information to make combat decisions. However, teaching Airmen to become technical experts sometimes presents its own challenges.

“Adapting to everyone’s learning styles is very demanding,” Dylon said. “It’s hard catering to different education needs. One person could stare at a power point for eight hours and be fine, but the majority of people need you to cover the information hands-on, draw on the board, or show them how to apply it.”

Megan echoed the need to remain flexible and said going in-depth about the capabilities of intelligence systems is a time consuming process that can be difficult to understand, but is something the course is specifically designed to do.

“The critical thinking piece is one of the main building blocks of the course, and it’s a hard thing for people to get sometimes,” Megan said. “They can see the pieces of the puzzle, but they can’t put them all together, and that’s where we come in. We teach them how to do that, look at everything as a whole and incorporate everything from an analytical perspective.”

All IFTU instructors share a common feeling of enjoyment as they see the students grow as intelligence analysts and professional Airmen.
“Towards the end of the course, seeing the students progress and apply the things we taught them is a great feeling,” Dylon said. “Being a part of a mission that just keeps growing and growing, and knowing I’m enabling that, is what makes me proud to do my job.”

Ashley credited her instructors for providing intelligence analysts within the MQ-1 and MQ-9 community with insight to critical capabilities.
“The IFTU instructor cadre is tireless in ensuring the best possible training and support is provided to every single person who goes through our course,” Ashley said. “I’m confident that RPA mission success is largely enabled by the quality of intelligence analysts in this enterprise.”