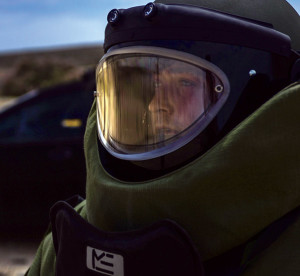 Staff Sgt. John Mitchell, 99th Civil Engineer Squadron explosive ordinance technician, wears an EOD suit during a training exercise at Nellis Air Force Base, Nev., May 5. Trained to detect, disarm, detonate and dispose of explosive threats all over the world, EODs are the specialists who bravely serve as the Air Force’s bomb squad.

NELLIS AIR FORCE BASE, Nev. — With improvised explosive devices having changed the way the U.S. wages war; the explosive ordnance disposal technician is a career field that is vital to successful missions now and in the future.

The 99th Civil Engineer Squadron EOD technicians conducted a training exercise on May 5, 2016, at Nellis AFB in order to hone their skills and better prepare for future scenarios.

The training simulated what it would be like if there was a vehicle-borne improvised explosive device present in a parking garage setting and the exercise was ran by Staff Sgt. Jeffrey Glover, 99th CES EOD technician.

“Today’s training scenario was a stateside vehicle-borne improvised explosive device that was parked in the lower level of a simulated parking garage in a work building in downtown Las Vegas,” said Glover.

This type of live training is a very valuable asset to EOD technicians, especially since IEDs have been brought to the forefront in modern warfare.

“This type of training is extremely beneficial because we have the opportunity to train on actual vehicles with live explosive tools,” said Glover. “The training IEDs themselves are fully functioning so you don’t have to guess whether or not the actions you took would have defeated them.  Vehicle-borne IEDs are a very feasible threat and they have been used in the U.S. more than once; for instance, the World Trade Center bombing in 1993 and the Oklahoma City bombing in 1995.”

The training entailed a number of different techniques that EOD technicians commonly employ, including the use of a mechanically controlled robot and EOD suit.

“Arriving on scene we ensured that the area was evacuated of all civilians,” said Senior Airman Kyle Osgood. “Once that was accomplished, we sent our robotics platform down to the suspect vehicle in order to determine firstly, if there was a hazardous device, and secondly, what that device was. This enabled us to come up with a plan of attack to counter the identified IED without ever having stepped foot near it.”

“With the hands-on expertise of an EOD technician necessary, the team leader, Staff Sgt. Jeffrey Glover, walked down to the vehicle, encased in the EOD 9 bomb suit. When he arrived, Glover utilized the Percussion Actuated Neutralizer, a tool that shoots water at high speed out of a barrel similar to a shotgun, and took aim at the device. After returning to the EOD safe area, the PAN was remotely fired, and the IED neutralized.”
Even though EOD technicians are highly trained, obstacles arise in every scenario, because every situation faced is unique.

“Right from the start our robot did not want to cooperate and that certainly complicated things,” said Glover. “Without being able to use the robot to recon the vehicle I essentially had to make a blind approach.  Not knowing what to expect obviously makes it difficult to plan ahead.  The overall length of an operation can really wear on you as well, mentally and physically.”

While the obstacles presented to the technician were simulated for a stateside scenario, they also serve as a valuable resource to gain experience for a deployed situation.

“This training is for a scenario we would encounter in the U.S., but it can be directly applied to many foreign nations in which we have bases that are not in a conflicted area,” said Osgood. “When we are conducting these counter IED operations in a warzone however, the techniques we would utilize could change drastically due to the unpredictable nature of operating in a hostile environment, which places a greater emphasis on staying as far away from the device as possible and returning the scene to normal in the most expedited manner.”

With the valuable training opportunities available, EOD technicians gain the ability to become prepared for anything that may be thrown at them in the future, stateside or deployed.

“This job is fun, it’s dangerous, and it’s rewarding,” said Osgood. “By conducting training such as today’s, we are able to ensure that we can approach and defeat anyone and anything that poses a threat to our nation.”