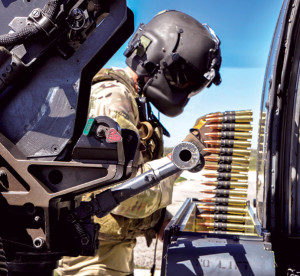 NELLIS AIR FORCE BASE, Nev.–The U.S. Air Force Weapons School’s combat search and rescue squadron here put a training concept for enlisted flight-certified service members through its paces from March 21 to May 6 with the help of two local Airmen.

The ATC’s central principle is to teach the “why” of personnel recovery operations. The 34th WPS wants Pave Hawk SMAs to know not only what to do but also the reason and physics behind tactical decisions.

The SAT phase served as the ATC’s introductory phase. It familiarized the students with Weapons School standards and briefing, debriefing, and instructional techniques. The students learned to fight against various radar threats. They also studied radar theory and saw the defensibility and survivability of different aircraft.

For the TE phase, the students traveled to Gowen Field and the Orchard Range Training Complex in Boise, Idaho, for two weeks where they tackled aircraft and weapons employment during the final stage of rescue missions. The students knew the survivors’ location but had to eliminate reactive threats in a contested area prior to recovering the personnel.

Because of its dynamic nature, the TE phase is the most difficult to execute, according to Maj. Michael Kingry, 34th WPS TE phase manager. The students learned to use tactics, such as fixed forward fire of the .50 caliber weapon while in flight, and took control of certain planning aspects (also known as white-cell academics) for the TE phase.

“The students had to do a factor threat analysis to discriminate between targets in a threat density they’ve never seen before,” said Staff Sgt. Kevin Holland, 34th WPS SMA. “They had to make decisions in a dynamic environment with little time for deliberation. They also took the lead and made the call to orient the Pave Hawk from the back at an increased operations tempo, all while still manning the weapon.”

In the final CSAR phase, the students applied everything they had learned during the ATC in a capstone integration with 66 WPS A-10 Thunderbolts pilots specifically trained in search procedures, authentication techniques and helicopter support tactics. The students combined the lessons of SAT and TE to employ as part of a large-force exercise to recover simulated downed aviators. Members of operational rescue units seldom see a large-force employment of this kind, according to Lt. Col. Evan Scaggs, 34th WPS director of ops.

Overall, Cosca and Miller found the prospective ATC to be challenging yet beneficial. They agreed the course exposed them to situations they would not see in their regular units.

“The ATC course is a step in the right direction in a way that bridges the gap in training between a unit’s MQT [mission qualification training] and to being selected for instructor SMA. The ATC provided an avenue for exposure and applicability to CSAR tactical doctrine most SMAs only get to read about,” Cosca said.

The 34th WPS identified a need for advanced training after the aerial gunner and flight engineer career fields merged into the current special missions aviation career field. During visits to provide focused training to CSAR units, the 34th WPS cadre was inundated with questions about advanced tactics and procedures.

“At the end of every sortie, I’d have a line of enlisted flyers 15 deep who wanted to talk about what had happened, what they’d heard, etc.,” said Master Sgt. Michael Miller, 34th WPS SMA. “There was a thirst for knowledge from SMAs who wanted to get better.”

The 34th WPS is moving forward in the approval process for the ATC. Although the Combat Air Forces has requested this training, a challenge will be continued sustainment from units dealing with manning challenges due to high operations tempos.

“It’s hard for units to allocate manning for seven weeks,” said Tech. Sgt. Joshua Martin, 34th WPS TE phase NCO in charge. “But, in the end, the units get back SMAs who have learned from mistakes in a realistic environment and have gained knowledge they can pass on to the Combat Air Forces.”