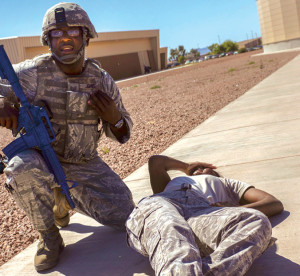 A 99th Security Forces Squadron Airman uses his radio to communicate with other Airmen on scene during a simulated active shooter attack during a base exercise at Nellis Air Force Base, Nev., May 12. The exercise scenario was complex and had many moving part in order to present unique challenges to the units that participated.

NELLIS AIR FORCE BASE, Nev. — On May 9 to 12, Nellis AFB conducted a base wide exercise to evaluate the real-life response capabilities of emergency personnel and the base populace to a variety of scenarios depicting situations that could impact the base at any time.

The exercise was named “Nellis Multi-Assault Counter Terrorism Action Capabilities Exercise” and there were over 300 participants from Nellis AFB, Creech AFB and tenant units. The participants included Wing Inspection Team (WIT) members, scene controllers for additional safety, and volunteers simulating victims and witnesses to the incident.

Each day of the exercise readiness and procedures of various base agencies were tested with different sets of scenarios and challenges. May 12, served as the pinnacle of the exercise as it simulated a multi-location large scale attack.

Prior to the exercise, Tech. Sgt. Christopher L. Bossley, 99th Air Base Wing Inspector General Inspections, wing inspection planner NCO in-charge, knew that with the scenario being so complex and having so many moving parts that some problems might arise during the exercise. He also knew that the well-trained and disciplined units would be able to adapt and overcome the unique challenges presented during the scenarios.

“Some foreseeable problems might be miscommunication and confusion since this will be a fast paced event. Some strengths, after seeing a couple of exercises, I foresee strong unit cohesion and a fast emergency response from the base,” said Bozley. “Explosive Ordnance Disposal, Emergency Management, Fire Department, Medical Group, and Security Forces have historically been very efficient with their responses and it is going to be awesome watching them handle this new complex scenario.”

The simulated attacks occurred at the track behind the Warrior Fitness Center during a mock squadron physical training work out and at hangar 220 during a mock ceremony. Each scenario had acting active shooters with weapons firing blanks and included volunteers who underwent moulage, to simulate injuries that would occur during such an attack.

Not only did each location have active shooters, but also included another aspect to the scenario. The track had a simulated bomb detonation and another simulated bomb that was planted. At hangar 220 simulated smoke grenades were used that limited the visibility for responders.

This was one of the largest exercises at Nellis AFB and the scenarios were developed taking real-world events into account.

“I think this exercise will help identify short falls for multiple units and that will always be a success for us as a base,” said Bozley. “Anything we can identify now and correct prior to a real world event will benefit the base tremendously.”

The exercise will be used as a learning tool and will provide feedback on what went right and what areas that could be improved on.

“There are always key aspects to learn in conducting exercises on this level,” said Kenneth J. Pereira, 99th Security Forces Squadron security specialist and instructor. “Some high points were the ability and effectiveness of integrating the Las Vegas Metropolitan Police Department in responding to the exercise. Security Forces trains with Metro on a regular basis and to see that training pay off was great.”

“The communication and tactical aspect were textbook and is something that should be noted. It is also great to know that we (Nellis AFB) can respond and be effective when our forces are thinned out. We see Senior Airmen stepping up and filling roles that NCO’s typically perform. Not only are they filling those boots, but they are performing at the NCO level. I think the biggest thing learned is that Nellis is capable of handling an attack of this nature. It has never been done at this base before, we didn’t play it safe, we threw a lot of exercise injects at our first responders and they succeeded.”

Overall the exercise proved to be a success as it allowed Airmen to put their training into action and showcase their readiness to handle a situation of this magnitude.

“The exercise was extremely successful,” said Pereira. “We (Nellis AFB) needed to have an exercise of this magnitude. When we look at history and we see the multiple attacks in Mumbai, Paris, and Brussels; we need to be prepared. Multiple attacks of this nature can be isolated to just Nellis AFB or we (Nellis AFB) could be a target of a larger multiple attack event within the Las Vegas Valley.

“The ability of our first responders in this exercise was amazing, to see two separate attacks occur and the confusion that comes along with having to sort out what is happening is great training, because it is really going to happen. I think our Nellis responders worked together great, from response, to terminating the threats, to triage/treating victims. They overcame tough obstacles, communicated effectively, and more importantly saved lives.”

“It’s sad to say but this style of attack(s) is the new norm,” said Pereira. “We need to exercise at this level and to continuously test, train, and evaluate the types of attacks our enemies are bringing to our door step. Whether it is a single active shooter (one of our own) or a multiple attack with a few gunmen set to drastically impact the mission, we need to be ready. Our minds, attitudes, and abilities to perform our job is needed. Exercising on a large scale will only make our Airmen better prepared for what is already happening in the world today.”