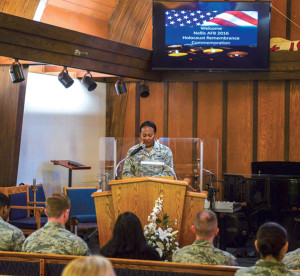 NELLIS AIR FORCE BASE, Nev. — John Prendergast once said, “The biggest road block to action on genocide and other human rights crimes is ignorance.

Most people just don’t know that such things are happening and often, if they have a vague idea they are happening, there is a feeling that there is nothing that can be done to stop these crimes.”

Over the course of the past 150 years, millions of men, women, and children have lost their lives to genocide or mass atrocities around the world.

Genocide is the deliberate and systematic extermination of a national, racial, political or cultural group. In countries around the world, because people are different and believe different things, they are targets in these crimes.

To raise awareness and help educate the men and women on Nellis AFB, several events took place May 6 to May 13 as a part of Holocaust Remembrance Week.
The events that took place were:
• Lizkor Awareness Run, May 6, at Runners World. Lizkor means ‘To Remember’ in Hebrew. The run kicked the week’s events and an invitation to Nellis and Creech AFBs to remember the millions of victims of the Holocaust. The run also featured information about the military units that liberated the camps after the Holocaust.
• Holocaust Remembrance Commemoration and Candle Lighting Ceremony, May 9. Holocaust Survivors were present to share their stories.
• Moral Compass to Leadership Professional Development seminar, May 11, at the Base Theater.
• Holocaust Remembrance Luncheon, May 13 at the Club. The luncheon featured a survivor question and answer panel and 16 Holocaust/Genocide survivors present to share their stories and answer additional questions about their experiences.

Educational information was also displayed at the Base Exchange during the week. 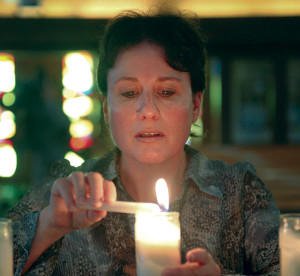 A candle is lit during the Holocaust Remembrance Commemoration and Candle Lighting Ceremony at Nellis Air Force Base, Nev., May 9, 2016. The survivors that attended were present to share their stories with the Airmen of Nellis AFB.

“Among the other Genocides were the conflicts in Armenia, Cambodia, Darfur, and Rwanda which is still happening today. Millions of people killed, children imprisoned, families torn apart; and that is why it is essential that people know about these events. The more educated we are, the more we can be proponents of change in the future.”

The theme for this year’s remembrance week is “Defying Genocide: Fighting the Fires of Hate.” Through the series of events that took place during the week, the goal was to recognize and pay homage to the many historic, cultural, social, and economic contributions of Holocaust victims and survivors, and to educate about the atrocities of genocide and its effect on society.

“Only 70 years ago, humanity was forgotten and innocent families (children too) were interred as prisoners,” said Tammy Johnson, Detachment 1 413th Flight Test Squadron Combat Search and Rescue Combined Test Force, test support assistant, “Those too weak to work were sent to die a torturous painful death in the gas chambers or slowly from starvation and disease.

“Families were stripped of their belongings, separated, demoralized, humiliated, and herded like animals. Knowledge of such horrible events equips us as leaders and citizens of the world to guide by a moral compass and never allow such things to happen again. The Holocaust Remembrance Week is your chance to witness, to hear face-to-face from survivors, to ask them questions and learn from them so that you can ensure this part of history is never repeated.”