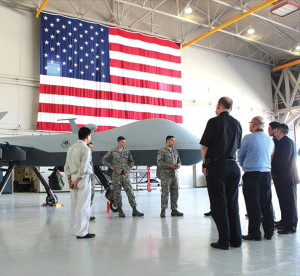 Crewmembers explain the characteristics of the MQ-9 Reaper to visiting priests during Air Force Recruiting Service’s “Come Be With Us Familiarization Tour” at Creech Air Force Base, Nev.

CREECH AIR FORCE BASE, Nev. — As a Roman Catholic priest, Father John Tran has followed his spiritual calling by serving parishioners in Portland, Oregon, and by providing community service in New Orleans as a member of the religious order Domus Dei Clerical Society of Apostolic Life.

In his heart though, he has another calling — a desire to serve a nation that went to war to help protect his home country nearly 50 years ago.

Tran was born in South Vietnam. At the height of the Vietnam War in the late 60s his father joined the South Vietnamese Air Force (VNAF) and became a fighter pilot. As an ally, the U.S. government allowed VNAF pilots to receive advanced pilot training at select Air Force bases in the United States. When Tran’s father completed his training he returned back to Vietnam and was later killed during a bombing raid on Communist forces.

Tran, who immigrated to the United States in 1992, was just an infant at the time of his father death. He’s had to rely on stories passed down by family members to piece together his father’s military legacy. A longing to follow in his father’s footsteps and to give back to American service members has led Tran on a quest to pursue a career as a Catholic chaplain in the U.S. Air Force.

He recently took that first step by participating in Air Force Recruiting Service’s “Come be with Us Familiarization Tour” at Creech and Nellis Air Force Bases in Nevada. Tran, along with five other Catholic priests, got a first-hand look at how Air Force chaplains serve the spiritual needs of Airmen.

“Creech is the closest approximation to a remote or deployed setting to offer that perspective, while Nellis is a large base with several important missions,” said Air Force Chaplain Recruiter Capt. Thomas Foley.

Now in its 11th year, the three-day tour allowed participants to become familiar with the roles and functions of active-duty Air Force chaplains while interacting with Airmen in various career fields.

Fielding questions from the group of priests, remotely piloted aircraft crewmembers at Creech explained the missions of the MQ-1 Predator and MQ-9 Reaper. Tour participants also tested their skills in the RPA simulators.

The Creech Airmen Ministry Center, a place where base members often go to unwind and shoot pool or play table tennis, was transformed into a makeshift chapel to celebrate Mass.

The priests also received a mission briefing at the 432nd Wing headquarters and ate lunch at the base dining facility. 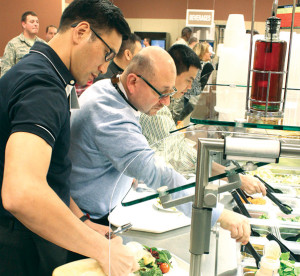 From left, Fathers John Tran, Gustov Montanez and Dwong Nguyen visit the salad bar in the base dining facility at Creech Air Force Base, Nev. The civilian Catholic priests got a first-hand look at the Air Force chaplain way of life as part of the recent Air Force Recruiting Service’s “Come Be With Us Familiarization Tour” of Creech and Nellis AFB, Nev.

At Nellis, the group celebrated Mass in the base chapel and toured the base including stops at the Threat Training Facility, which houses formerly classified foreign weapons vehicles and the 58th Rescue Squadron where they received briefings on the Air Force pararescue mission.

“The tour was just a confirmation of my call to serve as an Air Force chaplain. As human beings we have dreams and goals in life. My dream is to be a military chaplain,” said tour participant Father Gustavo Montanez from the San Antonio Archdiocese. “I’ve learned that Air Force chaplains are supportive and rely on one another.”

Montanez, who has served two-and-a-half years as a civilian contract chaplain for Joint Base San Antonio-Lackland, Texas, is also taking the steps to become an active-duty Catholic chaplain.

“I serve others from my heart. It’s what I feel,” he added. “Now I want to serve military families.”

According to Chaplain Foley the Air Force has a critical need for Catholic chaplains. Some bases do not have priests serving as active-duty chaplains while others have had to contract out services. “That’s why our ‘Come Be With Us Familiarization Tour’ is so important,” he said.

Foley explained there are several factors that make recruiting candidates into the Air Force Catholic chaplaincy difficult. “First, there’s a general shortage of Catholic priests in the United States,” he said. “Plus Catholic bishops may be reluctant to grant permission for a priest to join the military since they are needed in home dioceses and parishes. Also, a significant number of Catholic priests are born outside of the United States and lack required citizenship.”

To be an Air Force Catholic chaplain, a candidate must be an ordained priest with a master of divinity degree or its equivalent with at least three years of ministry experience. He must also be in good standing in his diocese or religious order and the bishop or superior must be willing to grant permission for him to serve on active duty for at least three years.

“Being an Air Force chaplain is a ‘call within the call.’  It’s a special way to serve God and country by serving the men and women who wear the uniform of the United States Air Force,” Foley said.

Each of the participants agreed that the Come Be With Us Familiarization Tour gave them a better understanding of the Air Force chaplain way of life. For Father Tran it was also a reaffirmation of his “call within the call.”

“I feel my father is still living because I’m living.  I’m part of him. I want to do him service,” he said. “He died not only for me to have freedom but he died helping a country [United States] that was looking for justice and freedom as well.”