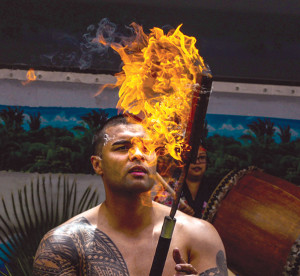 Staff Sgt. Justin King, 99th Civil Engineer Squadron fire protection flight NCO in charge of logistics, performs during the Asian American and Pacific Islander Heritage Luau at Nellis Air Force Base, Nev., May 20. The Luau celebrated the culture, traditions and history of Asian Americans and Pacific Islanders in the United States with food and entertainment associated with their culture.

NELLIS AIR FORCE BASE, Nev. — May is Asian American and Pacific Islander Heritage month, and this year’s theme is “Walk Together, Embrace Differences, Build Legacies.”

To celebrate the Asian Pacific American Association of Nellis, Creech and the Nevada Training and Test Range hosted a Luau May 20 at Nellis AFB.

The Luau celebrated the culture, traditions and history of Asian Americans and Pacific Islanders in the United States with food and entertainment associated with their culture.

APAA members put a lot of time and practice into preparing for the Luau, which makes up most of the entertainment, which included modern hip-hop dance, fire knife dance, hula and Tahitian dances, as well as Haka. The other performances were contracted to the local Asian Pacific Islander dance groups in Las Vegas such as Taiko Drummers, Prodigy dance crew and Sue’s dance company.

“The planning and preparation for (the) luau started in March and continued throughout May,” said Senior Airman Mitch, 432nd Maintenance Group, Creech AFB, unit deployment manager. “By April, the event coordinators held weekly meetings with the board members committee point of contacts and volunteers. Altogether, APAA spent a minimum of 25 hours on meetings, to ensure (the) luau was successful.”

Asian American & Pacific Islander Heritage Month, previously known as Asian Pacific American Heritage Month, was introduced in June of 1977 by Representative Frank Horton of New York and Norman Mineta of California to proclaim the first ten days of May as Asian Pacific Heritage Week. A similar bill was introduced in the senate a month later by Daniel Inouye and Spark Matsunaga.

The month of May was chosen to commemorate the immigration of the first Japanese to the United States on May 7, 1843, and to mark the anniversary of the completion of the transcontinental railroad on May 10, 1869. In 1990, George H.W. Bush signed a bill passed by Congress to extend Asian-American Heritage Week to a month.

“The Asian American and Pacific Islander celebration is important because we recognize diversity in not only in our military but throughout the nation,” said Tech Sgt. Richard, 799th Air Base Squadron, Creech AFB, NCO in charge of vehicle management and APAA president. “We recognize the challenges faced by Asian Americans and Pacific Islanders and celebrate their great and significant contribution to our society.”

The Luau was an opportunity to share and celebrate the uniqueness of the Asian American and Pacific Islanders culture with the base population.

“Asian American and Pacific Islanders population is economically diverse,” said Richard. “They also play a big role in health and medicine, as well as having the highest educational qualifications. However, this varies for individual ethnic groups. I guess the most unique thing about these cultures is the way they value family. Their customs and courtesies toward elders and among each other. Wherever you go, you’ll always feel welcome in their communities. One of the things that we like to share is our way of life… and the variety of different food types.”

“All of these events, especially the Luau, were a great success because of the active members of the Asian Pacific American Association of Nellis/Creech/NTTR and the organizations alumni who also contributed,” said Richard. “Lastly, these events were successful because of the base leadership that supported their Airmen to lead and get involved with the Heritage Month.”