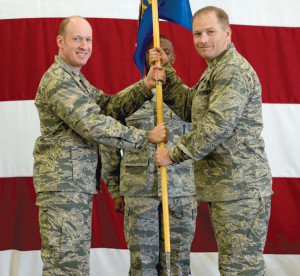 Col. Shane Henderson (right) assumes command from Col. Jason Hinds, 57th Wing vice commander, during the change of command ceremony held in Lightning Aircraft Maintenance Unit hangar at Nellis Air Force Base, Nev., May 26. The mission critical task of supporting 10 flying programs and 120 assigned A-10, F-15, F-16, F-22A and F-35 aircraft as well as all visiting Red Flag, Green Flag, and operational test and evaluation aircraft is a vital one that the 57th Maintenance Group accomplishes day in and day out.

NELLIS AIR FORCE BASE, Nev. — The mission critical task of supporting 10 flying programs and 120 assigned A-10, F-15, F-16, F-22A and F-35 aircraft as well as all visiting Red Flag, Green Flag, and operational test and evaluation aircraft is a vital one that the 57th Maintenance Group accomplishes day in and day out.

On May 26, 2016, during a change of command ceremony, Col. Shane Henderson assumed command of the 57th MXG from Col. Mark Rose at the Lightning Aircraft Maintenance Unit hangar on Nellis AFB.

“What makes the 57th MXG unique within our Air Force and our Department of Defense is its mission,” said Col. Jason Hinds, 57th Wing vice commander. “They deliver world class next generation air power in support of testing, tactics and training. You don’t find that anywhere else. They maintain six different aircraft types, own over 120 different airplanes and fly 14,000 sorties every year. Also, the 57th MXG is the largest munitions flight in Air Combat Command and responsible for nearly every weapon in the Air Force inventory. The maintenance group is flat out the core of Nellis operations, it’s the center of the bullseye on the patch for the wing.”

This unique group honored its commander of three years during the change of command ceremony, taking time to highlight the accomplishments of the 57th MXG while lead by Rose.

After receiving the Legion of Merit Medal, Rose took a few moments to address the Airmen in attendance during the final moments of his command.

“To the men and women of the MXG, whose successes became legendary within the combat air forces, time and again,” said Rose. “No matter the challenge, you overcame them all. What I am most proud of is how we focused on issues within our control and paid little attention to naysayers. This made you all the stronger, and brought all the accomplishments and success that we have seen the past three years.”

Rose summed up his speech by leaving the Airmen of the 57th MXG with his thanks and gratitude.

“Being your group commander and serving you these past three years was the greatest honor in my 25 year career,” said Rose. “I cannot thank you enough.”

Col. Rose lead the 57 MXG to new heights, and to pick up where he left off, the new commander brings his exemplary service record with him.

“While Col. Rose’s departure leaves huge shoes to fill, Col. Shane Henderson returns to the bullseye team with the talent and the experience to succeed in this challenging role,” said Hinds. “Coming from San Antonio, and no stranger to Nellis Air Force Base previously serving as commander of the 757th Aircraft Maintenance Squadron. Col. Henderson is a combat tested, career maintainer with a distinguished record. His experience with Nellis and his success in previous assignments leave him perfectly suited to lead the 57th MXG to new heights.”

Speaking to his Group for the first time, Henderson explained that while there are challenges ahead the 57th MXG will meet them head on.

“As we close a chapter on the 57th MXG and open another one, I wish I could stand before you today and say it’s going to be easy, but it’s not going to be,” said Henderson. “Our Air Force is going through some of the toughest challenges seen in years. As we persevere through there challenges, I ask you all to seek out innovation, make the most efficient use of our resources, up channel better ways of preforming the mission, focus on mission discipline, and make every sortie count.”

Not expecting the Group to accomplish this on their own, Henderson explained that he will command with the priority of getting Airmen the tools they need to succeed.

“As your commander I work for each and every one of you,” said Henderson. “I pledge my unwavering support to get you the tools, the training, the tech data and the time you require to effectively carry out the mission. I am truly humbled and honored to be your commander, and I look forward to meeting and working each and every one of you and adding another astonishing chapter to the history of the 57th Wing and the 57th MXG.”

With these priorities in mind Henderson takes the reigns of one of the most influential maintenance groups in the Air Force.