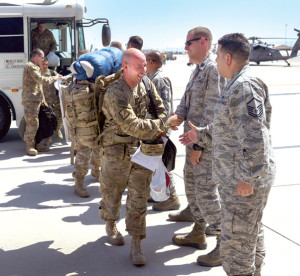 Airmen from the 66th Rescue Squadron and 823rd Air Maintenance Squadron shake the hands as they disembark from a bus after returning from deployment at Nellis Air Force Base, Nev., June 7. The deployment began approximately four months ago as members of the 823rd MXS and 66th RQS traveled to Afghanistan.

NELLIS AIR FORCE BASE, Nev. — Approximately 80 Airmen from the 66th Rescue Squadron and 823rd Maintenance Squadron were welcomed home June 3 and 7 after being deployed for approximately four months.

The Airmen were bused from the Nellis AFB flightline to the 823rd MXS hangar where families awaited their arrival.

The deployment began approximately four months ago as members of the 823rd MXS and 66th RQS traveled to Afghanistan.

The primary mission of the deployment was personnel recovery support through all of Afghanistan.

“We were to be on standby in case of the event that aircraft went down and pilots ejected and needed to be recovered,” Mauro said. “We were also responsible for helping out in certain situations where Special Forces or other Soldiers were in need of assistance and needed to be medically evacuated out.”

Though the squadrons made many achievements during the deployment, one instance stands out.

“So back in the end of March there was an F-16 that crashed on take-off,” Mauro said. “The pilot safely ejected and landed outside of base so we were able to pick him up and take him to the hospital in about 10 minutes from getting notified of the incident.”

For Senior Master Sgt. Kevin Jones, 823rd MXS assistant squadron superintendent, he relates his experience to that of a firefighter.

“When you deploy all you have is each other. Teamwork is very important and just giving each other support on a day-to-day basis. With new technology, being able to do things like call home, Skype, video Skype it definitely helps but when were in the fight we have each other, we have to look out for each other and that’s all I know.”