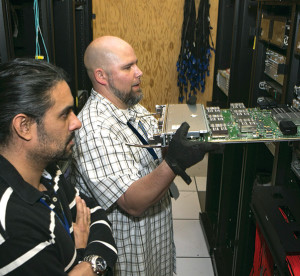 NELLIS AIR FORCE BASE, Nev. — Since the 1990s, the world has seen unprecedented advances in technology. Although these advances have led to countless benefits, and a revolution in the way we live our daily lives, they have also bring with them an ever increasing array of threats.

Though the average person may have to protect themselves against attacks on bank accounts or personal records, the United States Air Force has the responsibility to protect assets vital to national security.

At Nellis Air Force Base, the 505th Test Squadron, also known as Combined Air Operations Center-Nellis, is using technology to counter and attack threats that could cause harm to the Air Force as well as the United States.

Due to the continual and evolving threats in the cyber and space domains, the 505th TS received its first major weapons system upgrade in over a decade.

“We are currently going through a CAOC-N 2.0 upgrade, and it’s our first major weapons system overhaul since 2004,” said Lt. Col. Aaron Hatch, 505th TS commander. “We were able to pull this herculean effort off with partnerships at 505th Command and Control Wing, team Nellis and Air Combat Command. At the end of the day when it is complete, we will have a weapons system that is second to none and be on par with what operational level warfighters are using in their respective combatant commands.”

”This weapons system will be much more capable of countering cyber threats,” said Hatch. “It will have features such as automated virus scanning capability and the ability to detect, identify and eliminate network vulnerabilities.”

While the weapons system modernization may appear to target only on the air component, the upgrade will be primarily used to provide advanced operational level training to joint and coalition personnel during exercises.

“We are able to do two things now with this upgrade that we weren’t necessarily able to do before, but we are able to defend our network against hostile agents outside of our organization,” said Capt. Ishman Woodard, 505th TS current operations flight commander. “Now we are able to create an environment to test and train personnel who are going to be defending actual networks. We are strengthening our cyber surety and security posture with the upgrade, but also creating an environment for personnel to train.”

Traditionally, military exercises have focused on preparing the joint warfighter for combat operations in the air, land and sea. However, the new dynamic of war has introduced cyber and space as a new and contested domains. With the current upgrade, CAOC-N will be able to train personnel in all five domains. 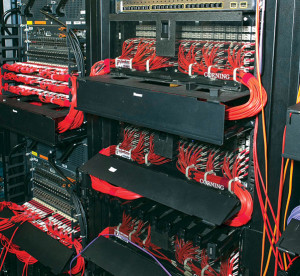 A new weapons system sits in the Combined Air Operations Center-Nellis on Nellis Air Force Base, Nev. in 2016. The new weapons system, which is the first upgrade in over a decade, will be fully mission capable by Red Flag 17-1 where the system will be used to train students before they arrive to an operational Air Operations Center where they will encounter real-world threats.

“This weapons system allows us to train students in the operational level of war and how to control multiple tactical environments,” said Brett Odle, 505th TS operations manager. “The upgrade that we are doing takes us from legacy technology into a more current configuration.”

Testing of the new weapons system will be occurring in the coming months, and it will be fully mission capable by Red Flag 17-1. During Red Flag 17-1 and future events, the system will be used to train students before they arrive to an operational Air Operations Center where they will encounter real-world threats.

“This weapons systems upgrade creates a robust cyber security posture that mitigates a lot of the threats that you see in the real world,” said Jeff Compoc, 505th TS deputy director of current operations. “This weapons system could be described as a dynamic digital playground. We have a lot of elasticity to create various scenarios to train not only air warfighters, but now the cyber warfighter. You can’t do this type of training in an operational AOC, so it is extremely unique to the CAOC-N.”

While cyber and space threats can destroy computer systems and entire networks, the upgrade gives the CAOC-N network the unique ability to be destroyed and immediately rebuilt for personnel to train on a daily basis.

“With this digital playground, it is designed to be destroyed as well as be rebuilt,” said Compoc. “Within these training scenarios, we have offensive and defensive cyber operations going on within this playground we created. It had to be designed where it could be destroyed, but must be immediately rebuilt so we can continue training.”

The weapons system upgrade will modernize training at CAOC-N, enabling warfighters to hone the skills necessary for warfare in the 21st Century before taking them down-range to the enemy.

“At the operational level of war, we are not the Airmen that are launching missiles, flying planes or talking directly to aircraft on the radio. We are the individuals who are making the war happen in terms air, space and cyber domain integration in support of the joint air planning process,” said Hatch. “With this weapons system upgrade, we will be able to effectively train multi-domain joint warfighters at operational level for years to come.”