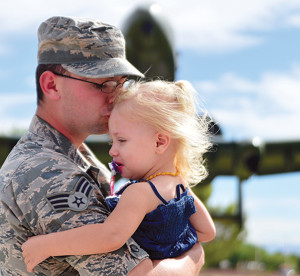 Senior Airman Christian, 432nd Wing/432nd Air Expeditionary Wing photojournalist and daughter Francesca, 2, share in a kiss at Nellis Air Force Base, Nevada, June 9. Christian, who grew up as a military child, reflects on his transition to from military child to military father. “On this Father’s Day I like to say: to the fallen, you’re legacy lives on, to those who are in harm’s way, stay safe, to those who served, thank you. To military dads everywhere, I salute you.”

My father served in the U.S. Navy as a sonar technician in the late 1990s for three years. In those three short years we lived in four states.

“A lot of reasons factored into why I joined, but I think some of the major reasons were that I had a young family,” said my father, John. “I was 21, Christian’s mom was was taking classes at Amarillo Community College and Christian was just over a year old.”

Before my dad joined the military he was working at a job but knew he needed a change.

“I was a first assistant manager at McDonald’s,” John said. “It was the only company I had worked for at that point.  The money wasn’t great and the benefits were non-existent.  I didn’t have a college degree and I had no idea what I really wanted to do outside of leading people.  The military offered me steady pay, healthcare and new job skills along with an exciting adventure of moving to new places with my young family.”

Still peace of mind didn’t come without tough times. Having to be away from family was the most challenging part for my dad.

“Being a dad can be hard, but I think being a young dad can be especially hard,” John said. “The military was able to provide a balance in my life during a period when I was very unsure of myself but still had to be a responsible man and provide for my family.”

Unlike my father, when I decided to join the military I didn’t have a family of my own. I was a single 18-year-old ready to travel the world. I wanted to build race cars, tattoo as much of my body as I could and be my own person.

When I was assigned to Creech Air Force Base as a photojournalist, my priorities were training physically and professionally in hopes my next assignment would be to a combat camera unit.

Just after eight months at my first duty station, I met a girl one night while out with some friends in Las Vegas.

Soon after, we started dating. Even though she had a two month old daughter, it didn’t matter to me. They both captured my heart.

Fast forward 11 months to our wedding day; not only was I a husband but I also assumed the role of a father figure in little Francesca’s life.

She’s not my child by blood, but she’s mine. Hearing her call me ‘dada’ warms my heart more than anything. With life changes, comes responsibility. My priorities have changed and it’s no longer solely about what I want.

“When I first met Chris, all he wanted to do was build his race cars,” said my wife, Rachel. “As time went on his main concerns changed. Now he makes sure Francesca is taken care of before anything else. Christ has become even more protective.”

Like my dad said, it’s difficult being a young father in the military, but I’m glad it provides the things I need in order to raise my family.

I now more than ever understand that being a father in the military means being prepared to sacrifice. As long as I choose to serve, I know I will miss birthdays, holidays, and milestones in my daughter’s life.

For some it’s worth it, but even if I won’t know for a while, what gives me peace of mind is knowing thousands of fathers have done it too. At every retirement ceremony, promotion, or change of command I photograph and in every history book I’ve read, there are great men and women doing what they needed to do in order to provide for their families.

This Father’s Day I find myself reflecting on those father’s lost in combat who died ensuring the freedoms of the next generations. It has brought new meaning to being a military child turned military dad.

On this Father’s Day I like to say: to the fallen, you’re legacy lives on, to those who are in harm’s way, stay safe, to those who served, thank you.

To military dads everywhere, I salute you.