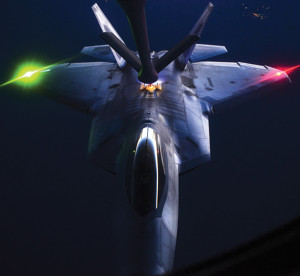 A KC-135, assigned to the 509th Weapons Squadron, Fairchild Air Force Base, Wash., performs aerial refueling on an F-22 Raptor, assigned to the 433rd Weapons Squadron, Nellis Air Force Base, Nev., over the Nevada Test and Training Range during the United States Air Force Weapons School’s Deliberate Strike Night, June 16. DSN is part of the final seven day Advanced Integration portion of the Weapons School curriculum; testing stealth and conventional airframes abilities to conduct attacks during the hours after the sun sets.

NELLIS AIR FORCE BASE, Nev. — The United States Air Force is well known as the pinnacle of air superiority.

Guaranteeing this supremacy is the Airmen who wear the coveted patch of the U.S. Air Force Weapons School. With approximately 100 weapons officers and enlisted specialists graduating from the school every six months, these Airmen are truly top-notch in their fields.

At the conclusion of nearly 400 hours of graduate-level academics and combat training missions, the Weapons School curriculum culminates with a week-long series of exercises known as Advanced Integration.

Composed of six different missions, Advanced Integration contains one of the most dynamic pertaining to fourth and fifth generation airframes. This is known as Deliberate Strike Night.

DSN reflects the degree of cutting-edge training provided by the Advanced Integration portion of the Weapons School curriculum by testing stealth and conventional airframes’ abilities to conduct attacks during the hours after sunset.

Since the purpose of DSN is to show the full-spectrum capabilities of the approximate 60 Air Force and U.S. Navy assets participating in the exercise; planning such an intricate exercise is no simple task.

“DSN planning begins with an initial conference three months prior to the event and continues until mission execution, which takes four days from the beginning of student planning to the end of the debrief,” said Maj. Jonathan Roe, 325th Weapons Squadron assistant director of operations. “I’m the vulnerability period manager for DSN. I oversee all exercise coordination and ensure that all the desired learning objectives (DLOs) for every participating squadron are built into the execution plan. It’s a huge responsibility.”

While Roe oversees the planning of DSN, its implementation requires cooperation of a multitude of specialized offices for the event to unfold smoothly and successfully.

“The Commandant’s Office of Integration assists in the coordination,” said Hoadley. “Maj. Roe won Air Combat Command Instructor Pilot of the Year, mostly for his instructional ability and his expertise in managing this high-visibility mission.”

In the design of DSN, one vital factor to take into account is the exercise’s stealth execution during hours of darkness.

“On the early nights of an air campaign, the situation that we’re simulating, the U.S. gains a significant advantage over our adversaries by striking at night,” said Hoadley. “It boosts the survivability of all USAF assets and increases our probability of achieving surprise. For stealth assets specifically, we prefer to employ at night because it reduces our visual signature.”

Since the focus of DSN is on fifth generation stealth assets with fourth generation conventional assets, one of the main night players is the B-2 Spirit.

“The B-2 fulfills the role of long range penetrating strategic attack,” said Hoadley. “Our main role is integrated air defense systems defeat. Stealth allows us to get inside of threat envelopes that conventional assets cannot penetrate. We’re able to employ weapons that degrade that threat and make it safe for follow on forces to conduct operations at an acceptable level of risk.”

With the B-2 at the forefront of the exercise, the stealth bomber pilots also serve a critical role in the execution of DSN.

“In addition to the integration opportunity that all of the other participants are benefiting from, the B-2 USAFWS students are charged with leading the mission planning cell,” said Hoadley. “A select few B-2 weapons instructor students will be responsible for putting the entire plan for the vulnerability period together. He must understand the critical capabilities that everyone brings to this fight and put them together to solve the problem we hand to them.”

While the B-2 and its pilots play a central role in the execution of DSN, the night wouldn’t be possible without the integration of the nearly 60 other airframes participating.

“Each participant brings an important piece of the overall puzzle that makes this plan come together,” said Hoadley. “Some assets protect strikers from hostile fighters, some assist in finding un-located threats, and others provide suppression of the ground threat to enable strike aircraft to drop bombs. At the end of the day it’s a team effort.”

This focus makes DSN a distinctive part of Advanced Integration and the unique training of the select Airmen who earn the coveted Weapons School patch and who ensure the air superiority of the United States Air Force.