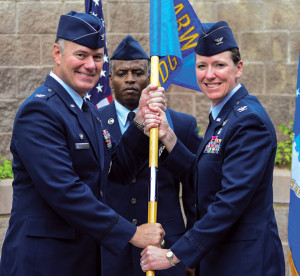 Col. Virginia Garner assumes command from Col. Richard Boutwell, 99th Air Base Wing commander, during the 99th Medical Group’s change of command ceremony at the Mike O’Callaghan Federal Hospital at Nellis Air Force Base, Nev., June 24. After the changing of command, Garner kept her comments concise by thanking and expressing her gratitude to all those in attendance.

NELLIS AIR FORCE BASE, Nev. — The 99th Medical Group is comprised of nearly 1,600 personnel. They provide health care services to nearly 11,000 active-duty members and their dependents, over 40,000 retirees as well as other eligible beneficiaries every day.

On June 24 during a change of command ceremony, Col. Virginia Garner assumed command of the 99th MDG from Col. Guillermo Tellez at the Mike O’Callaghan Federal Medical Center on Nellis AFB.

During the Ceremony Col. Richard Boutwell, 99th Air Base Wing commander, took the time to praise the exceptional job Tellez did as commander.

“I think of the unbreakable faith that Colonel Tellez had in the men and women of the 99th MDG, and the support of their mission,” said Boutwell. “Through countless inspections, changes in policies and ever-growing mission requirements you kept your team laser focused. You kept them fixed on the target and you stayed the course.”

After giving his speech Boutwell presented Tellez with the Legion of Merit Award, after which Tellez took the last minutes of his command to address the Airmen of the 99th MDG.

“I am honored and humbled by your presence this morning,” said Tellez. “We had the opportunity to hold this ceremony at some phenomenal, historic area of this installation, but I couldn’t think of a better place to hold it. Within the walls of this hospital, care is given every day and as I look across this wave of medics, partners and families, leaders it is truly a humbling moment for me.”

After, Tellez continued to give thanks to the many members who attended the ceremony he concluded his speech by thanking the Airmen.

“I am proud of you, “ said Tellez. “Thank you for your service, and the sacrifices of yours and your family. Thank you for serving this country. I have mentioned to you on many occasions that the care that you provide to your patients and your daily efforts never go unnoticed.”

After assuming command of the 99th MDG, Garner kept her comments of thanks and excitement brief and concise.

“I want to thank the medics of the 99th Medical Group. I’ve had the unique opportunity to work at the Air Force Medical Operations Agency, and you get used to seeing things at the 30,000 foot view. Looking across the entire enterprise and seeing what all of our medics are doing throughout the Air Force medical service. I will tell you, Nellis and the 99th medical group medics, both here and abroad, stand out. So I am grateful and humbled to become a part of this team.”