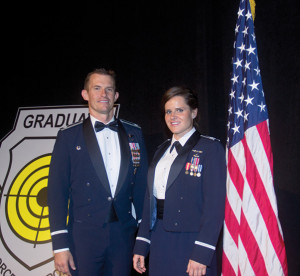 NELLIS AIR FORCE BASE, Nev. — The briefer approached the podium, prepared to lay out the day’s mission plan, turned to the fighter pilots, and opened the briefing with three simple words of greeting:
“Gentlemen … and ma’am.”

For Capt. Jessica Wyble, 66th Weapons Squadron A-10 Thunderbolt II pilot, the last word leaving the briefer’s mouth made her react as nails screeching down a chalk board.

“I hated it, because I want for people to not hesitate when they see me in a room,” said Wyble. “I want them to do or say exactly what they would if I were not there. I want them to speak to the masses, to the hearts and souls in the room, and if that room has 99 men and one woman all going out with a mission of defeating the enemy and they lead off with ‘Gents the plan today is …’ well that’s just fine by me.”

The U. S. Air Force Weapons School class 16A graduated 130 students, the graduates will serve as advisers to military leaders at all levels. Among the graduates was Capt. Jessica Wyble. The graduate-level weapons instructor course is rigorous training for the most elite weapon officers, teaching them valuable, useful skills both in and outside of their Air Force lives.

“The pillars of the Weapons School have always been ‘humble, approachable, credible,” said Lt. Col. Scott Mills, 66th WPS commander. “From a professional standpoint, we attack that through the ‘credible’ component. That’s making students the most credible teachers we can. From a personal standpoint, it’s more of the ‘humble, approachable.’ We look at their personality to make sure that, as a leader in the Air Force in the future, they’re a person who always remembers who’s the most important person—the person we’re serving at that time.

“As an approachable person, people can come to them and ask for input and guidance. Those are the types of leaders, instructors, and at the end of the day, the integrators we want in the Air Force out of the Weapons School,” concluded Mills.

“Weapons School has taught me how to go one level deeper, on life,” Wyble said, “Sure, tactics and being able to think through problems more critically, but also outside of flying, I have learned my own weaknesses inside and out, and have become so intimately familiar with them. I can see my faults materializing, and mitigate ‘myself’ earlier and more efficiently.”

The personal and professional growth demanded by this training course is perhaps best summarized in the words of Benjamin Franklin, a hardworking, self-made American, who said: “Without continual growth and progress, such words as improvement, achievement, and success have no meaning.”

To Wyble, the true value of the Weapons School course hit home on a sortie during Advanced Integration.

“During Integration, we had planned with all my best 16A weapons school under graduates (WUGs) for a day prior,” said Wyble. “During execution, there was a ton of air-to-air communications on the primary frequency. I was unsure if the factor threats to my ingress had been taken down by the guys out front doing the good suppression of enemy air defenses (SEAD) work.”

As the exercise progressed, there was an active threat called. Unsure of where the threat was located, Wyble simply stated: “Say ‘bullseye.’”

“’Dirty,’ an F-16 pilot, immediately came back with ‘Hog, your lane is clear,’” said Wyble. “This was awesome for a couple reasons: One, he voice identified me and knew I was an A-10, and two, he knew the plan well enough that after voice identifying me knew my planned route of ingress and the current threat picture well enough to give me very simple and understandable communication that told me I was good to go, and press to my target. Not many other places on Earth could run that seamlessly, and it was just awesome to be one of the guys a part of it all.”

In such instances as this, that Wyble communicated instantaneously on multiple levels with fellow pilots and that she was recognized and treated as a pilot among pilots matter to her. Training at Weapons School made both outcomes possible.

“At the end of the day nomenclature doesn’t matter to me, what matters is I am looked at as a pilot who is only as capable as I prove to be, with no slants or presumptions based on sex,” said Wyble. “I can safely say, that here at Weapons School I have received this.”

When all’s said and done, Wyble sees herself and wants to be seen as a skilled pilot.

“I just see myself as another fighter pilot, who likes to spend my Friday nights at the club with the other squadrons, laughing about all the stuff we did that week,” said Wyble. “I think that’s the way the other guys see it too, and it’s good.”

When asked about those who might want to follow her lead, Wyble downplays her status as the first A-10 woman graduate of the USAFWS weapons instructor course, stating that one’s active pursuit and achievement of a heartfelt goal is most important.

“To anyone out there who might want to try this lifestyle out, my advice is, do exactly what you want to do,” said Wyble. “Do it with passion, vigor and thick skin, and you will be fine. This community has had women in it for some time now, so it’s not as hard for me as it was the women of 20 years ago. It just requires you to really want and believe in your mission. It’s been a long time since I have felt like I was the only female in the room, and it’s been a long time since I wasn’t. So in short the community has been seemingly unaware of the difference in sex, and that is exactly what I was hoping for.”

With a nod toward those preceding Wyble, along with changes making her goal a possibility, as a graduate of the Weapons School, together with her peers, recognizes that hard work, dedication, and enthusiasm have made her one of many elite pilots in the U.S. Air Force.

“To be here now, coming out the other side, is a high that is like none other, and to share it with another 50 or so people who went through the same thing, well that defines brotherhood, my friend,” said Wyble.