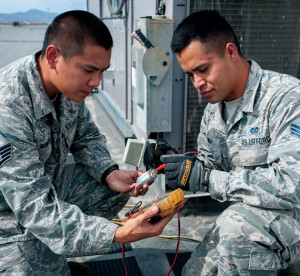 Staff Sgt. Dads Zyron Maniego, 99th Civil Engineer Squadron Heating, Ventilating, and Air Conditioning technician, and Senior Airman Octavio Nila 99th CES HVAC technician, check readings on a part used for an A/C unit atop of the Base Exchange on Nellis Air Force Base, Nev., June 28. After receiving 112 emergency calls last week, HVAC were able to fix and reset each unit atop of the BX within a 24-hour time frame.

NELLIS AIR FORCE BASE, Nev. — While stationed at Nellis Air Force Base in Las Vegas, Nevada, summer months can be brutal to Airmen and their families. Average highs from May to October can vary from 90 to 120 degrees Fahrenheit.

Fortunately, the 99th Civil Engineer Squadron heating, ventilating, and air conditioning section helps Airmen beat the heat by maintaining air conditioning units in one of the hottest cities throughout the country.

While most Airmen get to enjoy the cool air sitting at their work sections, HVAC technicians are out in the heat ensuring the base populous stays cool as well as data centers and electronic equipment that could falter to the hot temperatures.

“We not only provide human comfort air conditioning, but we also provide equipment system cooling for data centers where there are servers, computers or other electronics that must have a conditioned and controlled environment in order to operate efficiently, ” said James Romero, 99th CES HVAC control systems foreman. “Additionally we also operate, maintain and install process cooling systems that are utilized in such places as the Precision, Measurement and Equipment Laboratory. Another example of process cooling would be the “Spray Ring Chiller” at the Jet Engine Propulsion Branch where a cooling process is used to condition a jet engine test stand. If our systems are not operational it impacts many Air Force missions and that is why we take great pride in what we do.”

With the constant heat beating down on cooling systems, the amount of emergency calls the HVAC section receive a week can be overwhelming.

“We had 112 emergencies last week and it has only just begun for the summer,” said Master Sgt. Corneilus White, 99th CES HVAC controls section chief. “When we have exercises like Red Flag or Green Flag our work load increases because we have more people on base utilizing facilities that isn’t used on a daily basis. We have received as much as 30 jobs per day in the summer.”

With Nellis being such a large installation and the heat beating down throughout the summer, HVAC complete a couple of thousand jobs per year.

“We average about 2400 jobs a year here at Nellis,” said Romero. “We do another 150 medium to large installation projects per year where we completely remove and then install new systems. The value of those projects can range into the millions of dollars. For preventive maintenance, we probably average 15000 to 20000 hours per year.”

With HVAC Controls only having a little over 30 Airmen able to support the base’s needs, HVAC Controls say that their biggest challenge in their day to day operations is the educating their customers to fact that there are going to be slower response times.

“When we try to manage the jobs, I would say our biggest challenge is the customer understanding the priority system,” said White. “We want them to understand that we are not neglecting their phone calls or work orders, but we are following certain priority guidelines that we must abide by. If a facility with a higher priority comes up which can include the Combined Air Operations Center, Air Traffic Control tower, base communication facility, dormitories, or an entire facility without A/C, we must pull our Airmen off their current job and send them over there because of the mission impact.”

According to Romero, the majority of air conditioning systems are designed to operate around 105 degrees Fahrenheit, when that design temperature is approached and then exceeded the systems become less effective at removing the heat that has been gained.

“Essentially the system is working beyond its design capacity and will discharge warmer supply air temperatures,” said Romero. “When excessive outdoor ambient temperatures occur the HVAC Controls shop always sees a large increase of calls. Unfortunately, when someone calls in, usually there is a wait as Airmen in the HVAC Controls shop are already assisting other customers. We just want to let the base populace know that we haven’t forgot about them and will help them as soon as we can.”