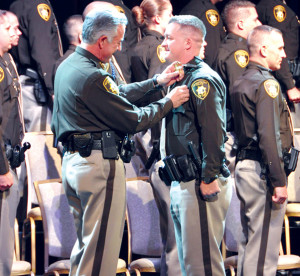 NELLIS AIR FORCE BASE, Nev. — Integrity, service and excellence are three words all Airmen have heard many times throughout their career.

These principles build the foundation of public duty, an undertaking by those motivated to impact the greater good for the whole.

On June 14th, three Airmen from the Reserve force here added two more tenets to their resume — partner and protect — as they were commissioned police officers in the Las Vegas Metropolitan Police Department during an academy graduation ceremony at the Orleans Hotel in Las Vegas, Nevada.

“Law enforcement is pretty similar to the military in terms of structure,” said Clashman. “It has a quasi-military sense where a rank structure and chain of command exists. It allowed me to be comfortable in the environment; it was a natural fit.”

Clashman is a photojournalist with the Air Force. He served on active duty for six years before joining the 926th Wing in 2015 as a traditional reservist.

He initially joined in an open-general aptitude with anticipation of training in Security Forces, as he had always had an interest in law enforcement.

“After my active duty service I thought I’d stick with what I had learned in the Air Force, which was public affairs. But after doing marketing on the outside for a year, I decided to make a change and seek out an opportunity to do what I really wanted,” said Clashman. “I saw that the LVMPD was hiring and I jumped all over it.”

The LVMPD values military experience and encourages those in transition or looking for a new career opportunity to apply for the academy. Carrington, Farris and Clashman all fit that bill.

Farris is a Combat Search and Rescue intelligence analyst in the Reserve, and is also working toward a degree in criminal justice.

“I decided to apply to LVMPD because I was seeking a challenge,” said Farris. “I wanted a career where no two days would be the same and where I could help and serve the community on a daily basis. I talked to many police officers and they all said they loved their job and couldn’t imagine doing anything else. Hearing this sentiment sold me on the profession.”

Upon entrance to the academy the three quickly discovered they were all from the same Reserve unit, and were then able to connect during their drill periods at Nellis AFB.

“I had a preconceived assumption there would be prior military, but I didn’t anticipate that two of my fellow recruits worked for the same organization as myself,” said Clashman. “It was comforting to know they were going through the same training.”

The academy is more than 1,000 hours of physically and academically demanding curriculum, so it helps to go into it with an existing support system.
Recruits experience realistic scenarios to train them on arrest and control, weaponless defense, firearms, patrolling, traffic enforcement and vehicle operations. They also focus on problem solving and decision making skills, as well as advanced verbal and written communication, to include learning basic Spanish.

“I understand the class motto was ‘public trust’ because they strive to cultivate relationships with the communities they serve. This is also true for the Reserve, as we are the continuity of the Air Force, planting roots here and becoming permanent residents of the city. It is our duty to protect and defend America’s citizens, so I’m inspired to know that our members truly take that to heart in all they do.”

Upon graduation the police officers undergo six months of field training at varied commands in Las Vegas on rotating schedules. They’ll spend this time shadowing another officer until they’re ready to patrol on their own, at which time they’ll be assigned to a permanent station.