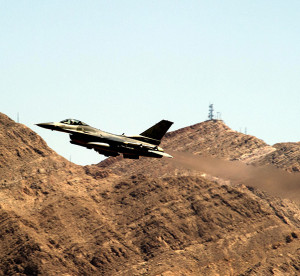 A 555th Fighter Squadron F-16 Fighting Falcon from Aviano Air Base, Italy, takes off from Nellis Air Force Base, Nev., July 11, 2016, as part of exercise Red Flag 16-3. Red Flag is the Air Force’s premier air-to-air combat training exercise and one of a series of advanced training programs administered by the U.S. Air Force Warfare Center and executed through the 414th Combat Training Squadron.

The three-week long Red Flag 16-3, a U.S.-only exercise that tests all participating units’ combat capabilities in a joint environment that centers on multi-domain integration, kicked off at Nellis Air Force Base, Nev., July 11.

Red Flag is the service’s premier air-to-air combat training exercise and one of a series of advanced training programs administered by the U.S. Air Force Warfare Center and executed through the 414th Combat Training Squadron. Previous Red Flag exercises have provided experiences to master the air domain, but todays’ exercises must incorporate all domains.

“We fly, fight and win in air, space and cyberspace. This is the exercise where we’ll put this to the test,” said Col. DeAnna Burt, the Red Flag 16-3 Air Expeditionary Wing commander.

Burt is the first space domain leader to ever command an AEW at a Red Flag exercise, a position that has traditionally been staffed by aviators. She will lead the joint operation into accomplishing its main objective of “establishing habits of achieving multi-domain combat success today to enable the rapid defeat of America’s adversaries tomorrow.”

As an AEW commander, Burt will be focused on multi-domain execution and will be engaging participants to determine how they plan to utilize the capabilities of all domains to supplement a tactical mission.

“We want to force people out of their comfort zone. We’ll be pushing them to talk about kinetic and non-kinetic effects and how when they are synchronized achieve tactical success,” the colonel explained.

Historically, the exercise’s third iteration of the year is a U.S.-only operation. This year, 115 aircraft from 25 Defense Department units will be operating at the Nevada Test and Training Range (NTTR), the Air Force’s premier military training area with more than 15,000 square miles of airspace and 2.9 million acres of land. And for the first time, an F-35 Lightning II is participating in the exercise. The aircraft is from the, Marine Fighter Attack Squadron 121, 3rd Marine Aircraft Wing, based at Marine Corps Air Station Yuma, Arizona.

Red Flag 16-3 participants are faced with 1,900 possible targets, realistic threat systems and an opposing enemy force that cannot be replicated anywhere else in the world. Nellis Air Force Base and the NTTR are the home of a simulated battlefield, providing combat air forces the ability to train to fight together in a peacetime environment, and to survive and win together.