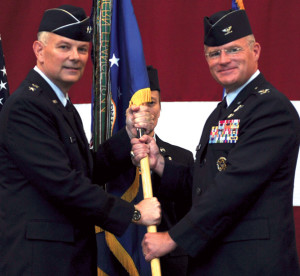 The 99th ABW provides installation support to more than 10,000 personnel assigned to Nellis Air Force Base, Creech AFB and the Nevada Test and Training Range.

During the ceremony, Boutwell expressed his gratitude toward the Airmen of the 99th ABW for their hard work, dedication and contributions to the installation during his command.

“During (my family’s) time here, we are forever grateful for the opportunities we have been given,” said Boutwell. “Over the past few years at Nellis, we’ve had amazing leaders and teammates that make up the 99th ABW. Trustworthy men and women with character and integrity whose commitment to the mission is truly inspiring.”

In closing, Boutwell stated how he was honored to have been commander of the 99th ABW and to serve alongside the Airmen.

After thanking the Airmen of the 99th ABW, Boutwell received his final salute from the wing and relinquished command to Murray through the passing of the guidon.

Murray then took the time to address his new wing.

“As I took the guidon, I was filled with two emotions, and one of them was pride,” said Murray. “The 99th in its present form began October of 1995, and as it turns out I’ve been coming here to Las Vegas ever since I was a young lieutenant. I did the math a while back and I’ve spent nine months here two weeks at a time. Whether it was Red Flag, Green Flag, or a conference, but as I reflected on that I realized that I was a consumer of what the 99th does every day. Now it gives me great pride that I get to be a part of all the things I took for granted.”

Murray continued on to say that he also felt a great deal of humility during the past week’s events during the changeover of command.

“At the same time I feel a sense of humility, Colonel Boutwell you have left a legacy of excellence that will be hard to keep up with,” said Murray. “I am humbled to be a part of the team that fuels the mission success of six wings and over 50 partners, and a team that is truly ‘top of the line.’”