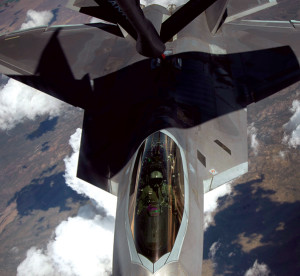 An F-22 Raptor, from Joint Base Langley-Eustis, Va., receives fuel from a KC-135 Stratotanker over the Nevada Test and Training Range during a training sortie during Red Flag 16-3, July 21. With the F-35B also participating in the exercise, this is the first exercise that both F-22 and F-35 airframes will participate in Red Flag.

NELLIS AIR FORCE BASE, Nev. — Over the Nevada Test and Training Range, aircraft from all over the globe blast through the Nevada sky in a simulated war scenario. In the exercise, called Red Flag, units test their abilities against some of the military’s premier aircraft while also receiving some of the best training offered in the world.

During the simulated dog fights, fighter aircraft going full blast on the afterburners can bring the fuel gauge all the way from full to empty in a timeframe of less than an hour. When this occurs, pilots can find their best friends of the sky: the 92nd and 93rd Air Refueling Squadrons located out of Fairchild Air Force Base, Washington.

“This exercise would be a very short exercise if tanker aircraft would not be able to participate,” said Capt. Tyler Todd, 93rd ARS pilot. “With how these guys are going at it during Red Flag by going full blast, they would probably run out of fuel within 30 minutes to an hour. That’s where we come in.”

With the KC-135 Stratotanker being the aircraft of use by the 93rd ARS, it’s not the pilots that supply the gas to other aircraft, but their Airmen, known as boom operators.

Senior Airman Eric Medina, a 92nd ARS boom operator, joined the U.S. Air Force after being fascinated by aviation. He feels he lucked out by having the title boom operator.

“This is the best job I’ve ever had,” said Medina. “Not a lot of people can say they do in-flight refueling. I truly enjoy the deployments and trips I get to go on. The only thing that I wish was a little different is that we are always on the road, so I don’t get to spend a lot of time at home, but besides that, I truly enjoy what I do.” 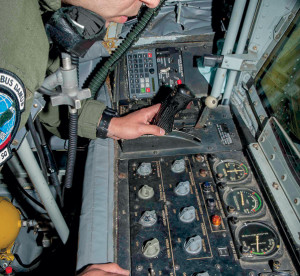 Senior Airman Eric Medina, 92nd Air Refueling Squadron boom operator, Fairchild Air Force Base, Wash., refuels an F-22 Raptor from Joint Base Langley-Eustis, Va., in a training sortie during Red Flag 16-3, July 21. While refueling aircraft, Medina is in charge of thousands of pounds of fuel that will be supplied to aircraft using a KC-135 Stratotanker in the sky.

In Medina’s short Air Force career, he has deployed five times and has been on numerous temporary duty assignments.

“We usually deploy twice a year as refuelers,” said Medina. “As TDYs may vary, we get them about two or three times a year. Our deployments are about two to three months long, which causes us to deploy more than Airmen in most other career fields.”

Medina is usually alerted when an aircraft is 10 minutes out from arriving, which is when he routinely prepares to conduct in-air refueling.

“I have a checklist that I have to run from beginning to end whenever I have to refuel aircraft. About 10 minutes prior to in-flight refueling, I will head to the back of the aircraft to prepare,” said Medina. “Whenever the aircraft is within a half mile, I will take over the radios from the pilots to start the process. If the aircraft has a wingman with him, we will refuel them as well so they can continue their mission.”

While taking off for a mission during Red Flag 16-3, the KC-135 that Medina and Todd fly on is capable of offloading thousands of pounds of fuel to aircraft.

If the crew runs out of fuel used for refueling, the KC-135 can offload its own personal fuel to help other aircraft. 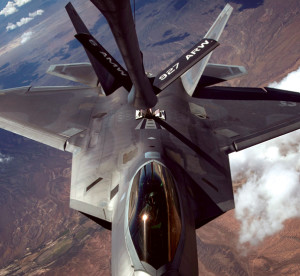 An F-22 Raptor, from Joint Base Langley-Eustis, Va., receives fuel from a KC-135 Stratotanker over the Nevada Test and Training Range in a training sortie during Red Flag 16-3, July 21. Red Flag, which is conducted by the 414th Combat Training Squadron at Nellis AFB, is a realistic combat training exercise involving the air forces of the U.S. and its allies that maximizes the combat readiness and survivability of participants by providing a realistic training environment.

“For the amount of fuel that we can carry or offload onto another aircraft, we are usually limited by the takeoff weight. We can carry over 150,000 pounds of fuel whenever we go out on a mission,” said Todd. “For an example, when we take off, we can take off with as much fuel as the entire weight of the aircraft if it didn’t have any fuel on board.”

For the tanker community, even though boom operators aren’t the personnel that drop bombs on targets or fire missiles from fighter jets, they still play an integral part in continuing the mission.

“As a tanker pilot when I was on a deployment, we were a force enabler,” said Todd. “We were there to support the mission. We bring the fight to where it needs to be and we stay there for as long as we have to.”