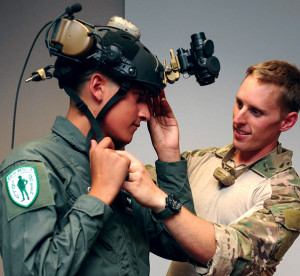 A pararescueman shows Reymond their night vision equipment during his visit to the 66th Rescue Squadron at Nellis Air Force Base, Nev., July 19, 2016. In addition to visiting with the pararescuemen, Reymond got a first-hand look inside the HH-60.

Unfortunately on Dec. 28, 2013 his dream was put on hold as he was diagnosed with acute lymphoblastic leukemia.

Recently, Reymond was given the opportunity for a wish. A wish he could have easily chosen as the typical family trip to Disneyland but that’s not what he wanted. His wish was to visit Nellis Air Force Base, Nevada and experience what it’s like to be a pilot.

On July 19, that wish came true as the Rivas-Cook family was wholeheartedly welcomed to Nellis AFB. They received a behind the scenes look at what it’s like to be stationed at the multifaceted military installation.

“When we learned that Reymond had leukemia we had no choice but to go into battle-mode,” said Vivian Rivas-Cook, Reymond’s mother. “The next year consisted of nothing but hospital stays, blood and platelet transfusions, and biopsies. Our stays were so frequent a port was implanted directly into Reymond’s heart to make it easier for the chemotherapy and various transfusions.”

For Reymond the cancer wasn’t the worst part.

“It was the chemo that takes your hair and it was really the most painful. I would be the in hospital for week-long stays,” said Reymond.

For the family of five the first year was hard. It was a balancing act for the whole family.

“Little by little he got better, and each phase grew further and further apart. He hasn’t physically been admitted to the hospital for over six months now,” Vivian said.

A life threatening diagnosis takes a toll not only the individual, but the entire family. The purpose of visiting Nellis AFB was to provide an interruption to the normal stressors of life and give the family a day of enjoyment without having to worry about anything else.

The first part of his day was spent with the U.S. Air Force Air Demonstration Squadron “Thunderbirds” where he got to spend time with the team members and partake in their launch and recovery.

They had many surprises planned for the family during their time with them. One of which was Reymond’s name being placed on the number two jet.
“I completely lost it when I saw his name on the jet, it was completely unexpected,” Vivian said.

After the Thunderbirds the family visited the Air Traffic Control Tower, the Threat Training Facility and the 66th Rescue Squadron.

In addition to seeing the life of a pilot, one of Reymond’s experiences was specifically geared toward seeing a Red Flag exercise.

Key Red Flag exercise players met with Reymond and presented him with patches and other various memorabilia. Reymond was also able to see a declassified version of the current exercise scenario from the main auditorium.

His time with Red Flag personnel concluded with a heartfelt salute, as he drove away.

Although they enjoyed every moment of their time on Nellis AFB, Reymond admitted that his favorite part was spent with the Thunderbirds and the pararescuemen.

“My day was amazing. I loved every minute of it,” Reymond said. “I still plan on joining the Air Force, I want to be a fighter pilot more now than ever.”

Doctors have deemed Reymond in remission. He is currently in the maintenance phase; he still has chemo sessions monthly and a spinal tap every three months. As long as everything continues as it has, his last day of treatment will be April 30, 2017.