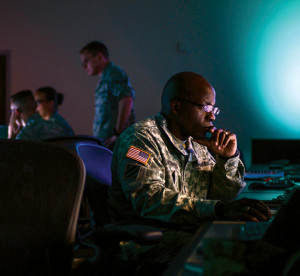 A soldier works at his desk in the mezzanine during a Blue Flag exercise at the 505th Combat Training Squadron at Hurlburt Field, Fla., July 22. The purpose of a Blue Flag exercise is to provide a Numbered Air Force the environment to train as the air and space component of a joint force by planning air and space operations and producing Air Tasking Orders and other supporting products for a given conflict.

HURLBURT FIELD, Fla. — The mission of the U.S. Air Force Warfare Center is to develop innovative leaders and full spectrum capabilities through responsive, realistic and relevant testing, tactics development, and advanced training across all levels of war. Blue Flag is a key exercise in helping to prepare leaders and achieve the overall USAFWC mission.

Blue Flag is an Air Combat Command exercise that provides air, space and cyberspace training for coalition air components and other services in the live, virtual and constructive environments.

The 505th Combat Training Squadron at Nellis AFB is ACC’s executive agent for the planning and execution of the Blue Flag program and provides environments for operational level command and control training, testing and experimentation.

The purpose of a Blue Flag exercise is to provide a numbered Air Force the environment to train as the air and space component of a joint force by planning air and space operations and producing air tasking orders and other supporting products for a given conflict.

“We conduce Blue Flag in the third domain of simulation training, the constructive domain,” said Green. “A constructive simulation includes people operating simulated systems. Real people make inputs to such simulations, but are not involved in determining the outcomes.”

It’s easy to see the importance of Blue Flag throughout its 40-year history as it has played an important role in preparing commands for war and humanitarian operations.

Blue Flag exercises are able to do so by trying to mimic real-world theater conditions and procedures as closely as possible.

“The goal is to train commanders and staff officers on command and control systems and processes so that, in a war emergency, they can immediately participate.

“As they exercise through this they are able to make better decisions and they can say ‘I’ve seen this before’ or ‘I remember something like this happened’. And they are able to work through the decision making process because we have already seen it once instead of being surprised,” said Col. Bryan Gates 505th Command and Control Wing Commander.”

“We will continue to support air component training with the Blue Flag program,” said Green. “This gives us the flexibility that we need to meet the training challenges of today. We will continue to do this with a distributed training methods and technical resources that allow us to make the scenarios as realistic as possible using out simulation tools.”

The USAFWC’s vision of a team of proud, professional and highly skilled Airmen who through innovation influence and support the USAF and joint partners with responsive, realistic and relevant testing, tactics development, and training across air, space and cyberspace domains is clearly on display during Blue Flag exercises and is an example of leading and influencing the development and execution of Live, Virtual and Constructive Operational Testing and Advanced Training.

The next Blue Flag exercise will be April of 2017.