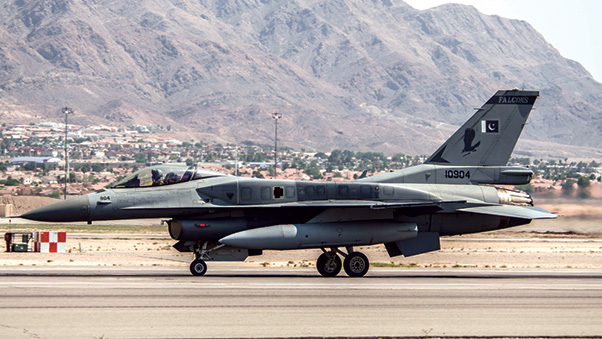 This has been a valuable training exercise for both the Pakistan air force and the U.S. Air Force as they continue to build and strengthen their relationship.

Red Flag 16-4 has provided the U.S. and Pakistan Air Forces the chance to improve integration, further training and enhance the readiness in air operations.

“The F-16 has been the lynchpin in accomplishing our mutually desired objectives,” said Pakistan Air Vice Marshal Syed Noman Ali, deputy chief of air staff. “At the strategic level it has been extremely valuable. On the capability enhancement and objective achievement on the ground, this aircraft has been the most useful.”

Pakistan brings a unique set of skills to the exercise, from their willingness to collaborate to their motivation to get the most out of the training scenarios.

“For me, it is absolutely phenomenal to have a partner who is willing to do that and looks at this as truly an opportunity to not only get better as a force within the Pakistan air force but also how to better integrate with everyone else,” said Maj. Gen. Rick B. Mattson, chief, Office of the Defense Representative, Pakistan. “That has been a major focus for the team that has been here and I have already heard about ways they are able to integrate better through technology and we will try to work on that part.”

Not only have the Pakistan pilots been impressive but also their maintenance team as well.

“I have a lot of experience in the Middle East and this is a very unique capability that they have,” said Mattson. “When you go through the maintenance facility and bays, it’s all Pakistan enlisted working on these aircrafts.”

Integration has been a major focus for Red Flag 16-4 and the Pakistan air force has played a key role in helping achieve that goal.

“When you have a force that is that professional and is dedicated to training and working together as a coalition you are going to get better as a group, and I think that has been the biggest lesson from this,” said Mattson.

It is exercises like Red Flag 16-4 that have helped build the bond between U.S. and Pakistan Air Force as it allows both nations to get together in a training environment to help learn each other’s strengths and utilize them in real world in real world situations.

“Whenever we’ve been together with the U.S. in terms of an exercise or other engagements it has been amazing, productive and mutually rewarding experience on both sides,” said Ali. “Whether its actual strategies that have been going on in the region or it has been exercises that train for certain events, I would expect this type of relationship to grow stronger in the future.”

The two air forces will continue to train together in future exercises.

“There is nothing which can hold us back,” said Ali. “Together we can venture into all domains and all things and further grow this particular bond which has been very rewarding for the Pakistan air force and for Pakistan.”