EGLIN AIR FORCE BASE, Fla.—Years ago, Lt. Col. Brad Bashore flew against the F-22 Raptor as an F-15E Strike Eagle pilot. Now, as an F-35A Lightning II pilot at this year’s exercise Northern Lightning, it was his turn to deliver fire from the clouds.

“It’s not a fair fight, and that’s exactly what we want for our adversaries,” said Bashore, the 58th Fighter Squadron commander. “To be on the offensive side this time and getting a chance to employ (those capabilities), I couldn’t ask for anything better. It’s like fighting somebody with their hands tied behind their back.”

Bashore and his wingmen at the 58th FS, which belongs to the 33rd Fighter Wing at Eglin Air Force Base, Florida, have been employing the capabilities of the F-35A, scoring as many as 27 “kills” in a single sortie at Northern Lightning, a large force exercise where fifth- and fourth-generation aircraft engage in a contested, degraded environment.

“I remember the first time I flew against a fifth-generation aircraft,” Bashore said. “It’s a change in mindset because you can’t target anything on your radar because it’s not there, and by the time you do potentially find something, it’s too late and they have already shot you.

“It’s frustrating, but at the same time understanding that it’s our asset is invigorating and gives you a lot of hope for the future as far as how successful this platform is going to be.”

While sharing many similarities with the F-22, the F-35As main advantage is its robust suite of sensors that give it the ability to process and share information with other players in the battlespace. These capabilities make the F-35A more lethal and survivable than any legacy aircraft, and eliminate any safe space for the enemy to hide.

“We took off out of Madison (to join the fight),” said Lt. Col. Bart Van Roo, Wisconsin Air National Gaurd 176th Fighter Squadron commander, which has F-16 Fighting Falcons. “We went to our simulated airfield out in the far part of the airspace. As the two ship from the northern half of the airspace we turned hot, drove for about 30 seconds and we were dead, just like that. We never even saw (the F-35A).” 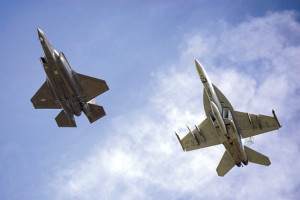 An F-35A Lightning II and an FA-18 Super Hornet fly in formation over Volk Field, Wisc., during Northern Lightning on Aug. 23. Northern Lightning is a tactical-level, joint training exercise that emphasizes fifth- and fourth-generation assets engaged in a contested, degraded environment.

Van Roo has been flying the F-16 since 2001 and as red air during Northern Lightning for 13 years. Red air is a formation of aircraft acting as the enemy for air-to-air tactics training.

“For us, as a capable fourth-generation fighters, we are used to being able to see and counter most adversaries that we have out there when we are playing red air,” Van Roo said. “Versus the F-35, it’s completely different. The most difficult thing is we just can’t see them like they can see us. It can feel like you are out there with a blindfold on trying to find someone in a huge space.

“We have been reliant on visual pickups of the aircraft only, which is extremely difficult to do, and at those ranges we are already dead before we could shoot back.”

Fortunately, the red air pilots at this year’s Northern Lightning can take solace that the F-35A is on their side for future combat deployments and will help ensure their ability to fly, fight and win against possible near peer adversaries.

“The significant increase in situational awareness that it gives us on the battlefield, the information sharing between jets, radar capability and, of course, capability that we will have with our opponents not being able to see us will be a game changer,” Van Roo said.