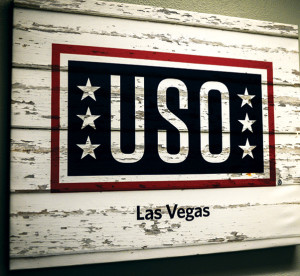 A sign hangs in front of the USO office located at the Community Commons Building at Nellis Air Force Base, Nev., Aug. 31. The USO Transition 360 Alliance is an initiative to help U.S. military personnel and their families successfully transition into civilian life after their service ends.

NELLIS AIR FORCE BASE, Nev. — Transitioning out of the military can be a stressful and overwhelming process. The USO offers assistance through a variety of partnerships and programs called their USO Transition 360 Alliance to make help make the process easier.

The USO Transition 360 Alliance is an initiative to help U.S. military personnel and their families successfully transition into civilian life after their service ends.

“Over the next four years, more than one million service members are expected to transition out of the military,” said Tim Mullin, USO Las Vegas center director. “The USO is committed to providing these individuals and their families with a successful roadmap to help navigate their journey.”

One of those partners is RP/6, a non-profit organization based out of Washington State. The USO has taken their approach to supporting transitioning service members and scaled it across the country. USO Las Vegas recently opened the 10th USO RP/6 Site at the Nellis AFB Community Commons last month.

The USO Las Vegas RP/6 Team helps servicemen and women develop plans for the future by connecting them to transition resources within their community.

“RP/6 helps in the transition process by taking a service member who has gotten a lot of information and helps narrow it down by centering them via the interview that determines what they want to do and connecting them to the resources that can help them achieve their goal,” said Clay Barber, a USO Las Vegas RP/6 scout.

“The USO Transition 360 Alliance programs are available to any transitioning service member, their spouse and their children,” said Mullin. “Typically we are looking to start working with service members and their families up to a year before they plan to leave the service and up to a year after they get out.”

What makes this service unique is USO takes into consideration each individuals needs and guides them in the right direction to fit what they are looking for.

“The USO Transition 360 Alliance takes a holistic approach to the transition process and focuses on three key pillars of integration: career plan, strong family and a plan for the future,” said Mullin. “We are providing a concierge service approach tailoring our services to the specific needs of a transition service member. Each of our clients will get pointed in the best direction to reach the resources they need to be successful.”

Whether it’s looking for a job in the private sector, wanting to further one’s education, or wanting to move out of state after transitioning out of the military the USO has a program for that.

“Our goal is to give service members and their families the tools they need to be proactive about their families’ transition out of the military so they do not fall through the cracks.”

For more information about the USO Transition 360 Alliance and their partners, please visit LasVegas.USO.org or email USOVegas@uso.org.

If interested in the USO Las Vegas RP/6 Program stop by the RP/6 office located at the Nellis AFB Community Commons building. Walk-ins are always welcome.