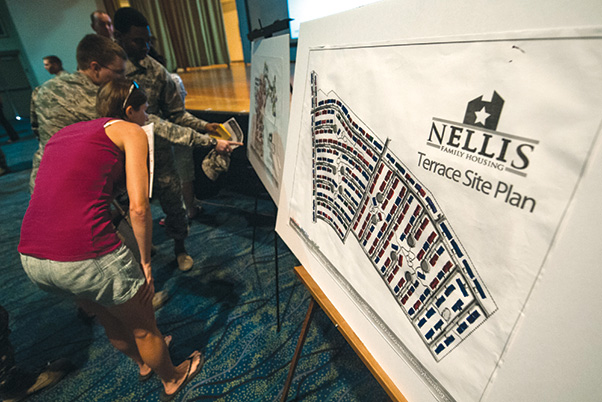 Airmen and spouses that attended a town hall meeting discuss the changes in utility allowance view a map of base housing at the Nellis Base Theater, Aug. 30. Col. Zev York, 99th Air Base Wing vice commander, and Lt. Col. Mike Freeman, 99th Civil Engineering Squadron commander, took time to explain in detail the changes will be occurring to base resident’s utility allowance.

NELLIS AIR FORCE BASE, Nev. — The 99th Air Base Wing held a town hall meeting at the Nellis Base Theater to discuss the upcoming changes to utility allowances Aug. 30.

“I’ll start it out by, this isn’t a Nellis choice,” said York. “It’s not even an Air Force choice. This is what the Department of Defense has chosen to do. The Navy and the Army have done this for a few years already and now we are transitioning to this. We held this town hall to make sure you understand what’s changing and how it may or may not affect you.”

Freeman then outlined how the new system will differ from the old system for the residents of base housing.

“The old method was a five-year historical average, plus a 10 percent buffer for the swing in potential weather,” said Freeman. “At Nellis, in 2014, we switched to a two-year average instead of a five-year average after we started doing live billing. Which is good news for residents, because that means that as we adjust to the new process residents aren’t going to come off that five-year plan, but a two-year average. Meaning residents shouldn’t see huge changes based on the consumption of energy.”

These changes, being incorporated DoD wide, will serve multiple purposes as the way utility allowances are calculated change.

“The three things that the new method brings is that it is more accurate, we aren’t doing that five-year average that is based on weather,” said Freeman. “It continues to promote energy conservation, which is an initiative that the DoD is incorporating and it better balances the financial incentives for residents against the project funding. Which means the new system gets it right, and residents are getting the utility allowance that matches what the average is instead of additional to the average.” 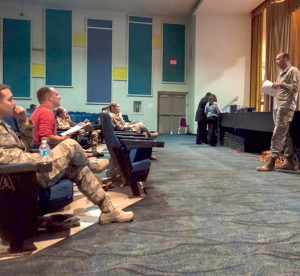 Lt. Col. Mike Freeman, 99 Civil Engineering Squadron commander, explains the changes made to utility allowances to Airmen that attended a town hall meeting at the Base Theater on Nellis Air Force Base, Nev. Aug 30. Freeman outlined how the new system will differ from the old system for the residents of base housing and how the new system will serve multiple purposes.

After elaborating on the reasons for the change, Freeman discussed with the town hall specifically how the new system would work.

“With the new system it’s actual real time billing in like-type homes,” said Freeman. “It’s the monthly consumption divided by number of like-type homes that becomes your utility allowance. This way it eliminates the anomalies, because it gets rid of that five-year average. So if there is a very hot September, everyone that is pooling their house in like-type units is experiencing that same September, so the rate will fluctuate up and down depending on the weather. Nellis has 15 like-type housing groupings that are similar in characteristics.”

Once the specifics of the new utility allowance plan were defined, the only question left was when these changes would be put into effect.

“October 1 is when we start doing the real time billing versus the historical average,” said Freeman. “Which means that you won’t see changes to your bill until November. Its month-by-month billing, but it also takes about 20 days for that bill to get to you. So your October bill, which you will get in November, will have the new methodology working. Part of that is you will still get the ten percent buffer. In order to ease everyone into the new process we’re leaving that buffer there, so you can see how the new billing works and what that buffer is. Then come July 1, 2017, that buffer will no longer be in effect, so your August bill is the first month that your bill will reflect the new system without the buffer.”

After questions, the vice commander took the time to address those who attended the townhall meeting.

“Thank you for all you do,” said York. “Also, thank you for choosing to be part of Nellis, Creech and NTTR base housing, and thank you for making your houses look exceptional and being part of the team.”