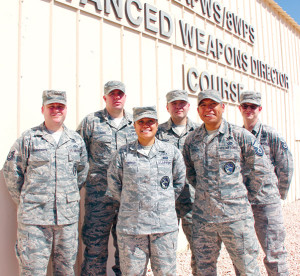 Members of the Advanced Instructor Weapons Director Course pose for a photo outside the building on Nellis Air Force Base, Nev. Sept. 6. The AIWDC, under the 8th Weapons Squadron, was the Weapons School’s first enlisted course and provides the Combat Air Force with enlisted
weapons directors highly skilled in leading and teaching.

NELLIS AIR FORCE BASE, Nev. — Legend has it Michelangelo created sculptures by envisioning the art a block of marble contained and chipping the excess away.

The sculptors of today’s Advanced Instructor Weapons Director Course at the U.S. Air Force Weapons School here have chiseled versions of the course over the years to produce their vision for tactical experts and instructors in combat command and control.

“Not only do [students] have to be great controllers, but they also have to be great instructors,” said Master Sgt. Jorge Gonzalez, superintendent of the AIWDC. “When they come to the class, we want to make them even better instructors and tactical enlisted leaders.”

Historically, the foundational stone for advanced weapons director training did not contain instructional skills. Prior to 1997, the only advanced training, the Counter Air Tactics Awareness Training Course, focused on job knowledge. When the Air Force eliminated CATATC, the 57th Wing established the Advanced Weapons Director School in 2000 to fill the void. From 2000 to 2006, AWDS operated under the 414th Combat Training Squadron (Red Flag) and then the 507th CTS.

AWDS emphasized the technical skills needed to become tactical experts, but the course also incorporated leadership skills, such as mission planning and briefing, and added an element of teaching.

Karen Oliver, a graduate of the first AWDS class in 2000 said she had been disappointed when CATATC was eliminated but liked the idea of AWDS when she attended a briefing at her unit.

“CATATC afforded us the opportunity to see bigger missions on a larger scale,” said Oliver, a former enlisted weapons director and now a civilian mission coordinator at the Nevada Test and Training Range. “This was not something weapons directors got to do on a regular basis to build their skills.”

The first days of AWDS were overwhelming, said Oliver, and the students in her class were concerned about how they would be received in the CAF.
“We didn’t know if the CAF would know what to do with a graduate from this new course,” said Oliver. “I was fortunate back at my unit to be integrated into fighter squadrons and to have a Patch [Weapons School graduate] flight lead who set me up for success by treating me like I was a Patch. The pilots treated me like I was a Patch even though I was enlisted. They incorporated my knowledge and everything I had learned into the squadron and were very welcoming. Their actions allowed me to grow even more.”

Oliver later returned as an AWDS instructor and helped usher in the next evolution of the course in 2007 when it became the Advanced Weapons Director Course in its new home at the Weapons School’s 8th WPS. Until then, the Weapons School had accepted only officer instructors, so the decision to add an enlisted course was groundbreaking.

The AWDC continued to build tactical experts but also gave students the opportunity to teach and participate in large-force missions with officers to multiply the capability of the entire force.

“It was a dream for me to come to the Weapons School,” said Christopher Gray, a 2005 AWDS graduate, former 8th WPS AWDC instructor and now a superintendent and current supervisor for the Range Operations Center at the NTTR.

The prestige of the Weapons School attracted Gray to the course even though he had graduated from CATATC earlier in his career.

“I worked with a lot of great patch wearers who helped and taught others in the CAF,” said Gray. “I wanted to be one of those. I enjoyed teaching and being an instructor.”

In early 2016, the 8th WPS refined the course further when it gained approval to implement the AIWDC, wherein “instructor” is a prominent feature.
“We want to move from a focus on being an expert weapons controller to being force multipliers,” said Gonzalez. “We want to make our CRCs [control reporting centers] better as a crew—across the entire spectrum of CRC operations.”

The target demographic for the AIWDC is also evolving. The 8th WPS hopes to select more junior-ranking enlisted weapons directors to ensure the CAF benefits from these expert instructors for a longer period, according to Gonzalez.

“AIWDC graduates comprise less than 10 percent of the enlisted weapons directors in the CAF,” explained Gonzalez. “[The 8th WPS] takes no more than four students per class to ensure an available force for combat commanders.”

The lowest-ranking graduate in the course’s history thus far, a Senior Airman at the time he attended, said he sees benefits for both the CAF and the AIWDC students.

“The nature of the school itself gives you the tools and abilities to excel, even after military service,” said Jacob Henry, 2007 AWDS graduate, former 8th WPS instructor and now a Las Vegas Metropolitan Police Department officer. “I use what I learned at the Weapons School in my current job. The school’s ‘humble, approachable, credible’ motto is still with me today.”

The AIWDC may change again in the future, but the bits of stone lying at its base have exposed a solid core for enlisted weapons director instructors.