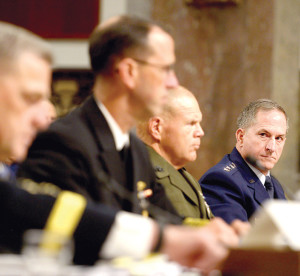 Air Force Chief of Staff Gen. Dave Goldfein testifies before the Senate Armed Services Committee during a hearing about Defense Department readiness Sept. 15 in Washington, D.C. Goldfein joined Chief of Staff of the Army Gen. Mark A. Milley, Chief of Naval Operations Adm. John Richardson and Commandant of the Marine Corps Gen. Robert B. Neller during the hearing.

“We need the flexibility to retire aging weapon systems and reduce excess infrastructure in order to afford the technology needed to maintain our advantage,” Goldfein said. “If we don’t have stable budgets, we mortgage the future to pay for the current readiness.”

The senior officers of the Army, Navy and Marine Corps also testified on behalf of their services. The common refrain was the crucial requirement of a stable, long-term budget to maintain a modern military force capable of defeating the nation’s adversaries. They agreed the current year-to-year budgeting policy is detrimental to comprehensive military capabilities.

“We will be forced to continually make strategic trades to simultaneously sustain legacy fleets, while smartly investing in modernization and the future technologies required to meet combatant commander demands,” Goldfein said.

Goldfein added readiness and morale are crucially linked components necessary to sustain an operational fighting force. He said he believes Airmen should be given every opportunity to succeed in their chosen occupations.

“Pilots who don’t fly, maintainers who don’t maintain, controllers who don’t control will walk,” Goldfein said. “There’s not enough money in the treasury to keep them in if we don’t give them the resources they need to be the best they can be.”

If enacted at fiscal year 2016 levels, a continuing resolution would result in Air Force funding $1.3 billion less than requested, limited procurement quantities for munitions, and delay adequate quantities on contracts — potentially limiting the availability of air strikes against Islamic State of Iraq and the Levant and other future threats.

Goldfein called on senate leaders to secure a return to stable budgets without extended continuing resolutions.

“Current global security demands remind us that America’s joint team must be ready to engage anytime, anywhere, across the full spectrum of conflict,” Goldfein said. “America expects it and with your support our Soldiers, Sailors, Airmen and Marines will deliver it.”