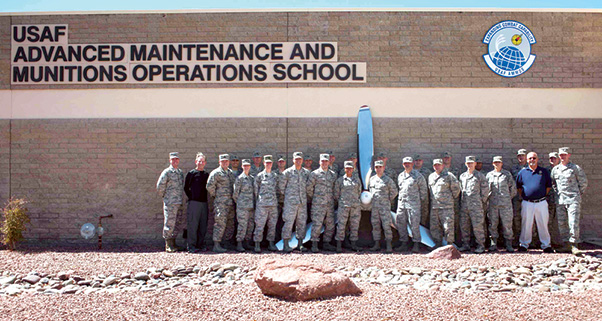 Students and cadre of the Advanced Sortie Production Course at the U.S. Air Force Advanced Maintenance and Munitions Operations School on Nellis Air Force Base, Nev., pose for a group photo Sept. 13. Throughout the inaugural 12-week course, the ASPC will provide graduate level instruction to develop highly skilled officers in the art of sortie production processes at the tactical level.

For AMMOS, a new course called the Advanced Sortie Production Course, plans to provide graduate level instruction to develop highly skilled officers in the art of sortie production processes at the tactical level.

“The ASPC was created to produce aircraft maintenance, munitions and logistics readiness officers with an advanced level education to more effectively solve sortie production deficiencies within their respective wings,” said Lt. Col. Joe DePorter, AMMOS commandant. “The Air Force saw the need for ASPC as an alternate solution to assist wing’s in meeting and exceeding their aircrew training requirements through a more effective and coordinated flying hour program.”

With the 12-week course allowing 16 students to learn the best training the Air Force has to offer in sortie production, the selection process to attend the course is highly competitive.

“Students are selected through a nomination process championed by Air Combat Command/A4,” said DePorter. “The selection is based on their performance and ability to successfully fulfill the role as a AMMOS graduate. Additional requirements include four to nine years’ time in service as an aircraft maintenance, munitions or logistics readiness officer and a wing commander nomination.”

With the inaugural course beginning last week, students in the first week were greeted by high ranking Air Force officials as well as a Harvard University professor.

“For the first week, the students of ASPC class 16A had the privilege to hear opening remarks and instruction from Brig. Gen. Jeannie Leavitt, 57th Wing commander, and Brig. Gen. Carl Buhler, ACC/A4 Logistics, Engineering and Force Protection director,” said DePorter. “Additionally, the class was privileged in hosting Dr. Gary Orren, Professor of Politics and Leadership at Harvard University, to instruct for two days on the Science and Art of Persuasion.”

With the course in its beginning stages, students can expect to learn both in the classroom as well as in hands-on scenarios.

“The advanced level training consists of a combination of lectures, exercises, hands-on training, exams and a week-long capstone event,” said DePorter. “The students learn the material at a higher level of proficiency in which they are pushed to understand the principles and are able to fully analyze the material being presented.”

With the increasingly numerous and difficult challenges the Air Force faces at the wing level each day, ASPC wants to have these challenges addressed at the tactical level in relation to sortie production.

“ASPC focuses on perfecting the skills and tactics that logistics leaders employ, whether at home station producing sorties to ensure our units are prepared for the next fight, or deployed to an austere location to fulfill their tasking,” said Maj. Andrew Glindmeyer, AMMOS director of operations. “It’s critical that we build a cadre of leaders at this level that are adept at effectively utilizing the resources we have to solve those challenges.”

With this being the first class offered in the new course, Glindmeyer expects to have changes made to the course to improve the lesson, but expects the course to benefit the Air Force regardless.

“Being the validation class, there will certainly be adjustments that we make based on feedback and lessons learned,” said Glindmeyer. “So far, the first week has gone according to plan and we’re excited for what’s ahead.”

With more classes planned for the future, DePorter is confident that ASPC will take the students to the next level where they will use what they learned to better their squadrons and units operationally.

“I have high expectations that ASPC will deliver highly educated, humble, credible and approachable officers back to their respective wings with an advanced set of techniques and procedures which will assist them in solving sortie production issues through effective analysis and application of people, processes and resources,” said DePorter. “I couldn’t be more proud of the exceptional instructors and support staff, who have put in a tremendous amount of time and effort over the past five months in making the new ASPC a reality.”