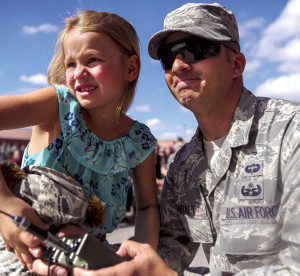 NELLIS AIR FORCE BASE, Nev. — On Sept. 21, 2010, in an effort to provide cover for fellow Airmen, Senior Airman Michael J. Buras was killed in action by an improvised explosive device while deployed at Operating Location Bravo, Kandahar Airfield, Afghanistan.

The 99th Civil Engineer Squadron Explosive Ordnance Flight paid respect to Buras by naming and dedicating their newest facility in his honor during a ceremony, Sept. 21.

“We appreciate everyone that’s here, and without a doubt it has been a long road, but an amazing road at the same time,” said John Buras, his father. “Our hearts have been filled so deeply by peers, people who knew Mike that gives us continuous support in the healing process and keep our hearts so full.”

During the ceremony, retired Air Force Maj. Gen. Timothy Byers, took the time to discuss parts of Buras’ past, including his deployments as an Explosive Ordnance Disposal technician.

“Many know of his story, born in Tifton, Georgia, one out of a population of nine to 10,000 and an EOD Airman stationed here at Nellis Air Force Base, serving in Iraq and two tours in Afghanistan,” said Byers. “It was during Mike’s first tour in Afghanistan, where he earned his first Purple Heart in May of 2009. He was injured when he was a gunner on a mine resistance ambush vehicle.”

Buras continued to serve after being awarded the Purple Heart, and deployed in support of ongoing wartime operations.

“Mike deployed for the second time on Aug. 25, 2010 to Afghanistan,” said Byers. “He and his EOD team were performing routine maneuvers when they came under attack six years ago today. While under cover they discovered IED materials, the team immediately took clearing operations to ensure the safety of the dismounted joint coalition team by locating two IEDs. Buras cleared a safe path to the two IEDs, identifying the primary device. While the team leader prepared to defeat the device, Mike provided armed over watch. Unknown to the team, a third device was camouflaged next to the safe area, and it was during these extraordinary operations, protecting other operators that Buras was mortally wounded.”

In honor of Buras’ ultimate sacrifice, his memory will always be celebrated by those who step foot in the new EOD facility.

“He died doing what he loved, and that’s what made him an American Hero,” said Buras. “This brick and mortar building will provide that environment to live in the spirit and the standard that he set for us. That is why this building will be in memory of Senior Airman Buras, and today his name has been etched as part of our proud heritage and promising future. We celebrate his life and he will always be remembered. Though he paid the ultimate sacrifice, one that we can never repay, we can always remember him for not only who he was, but what he stood for.”