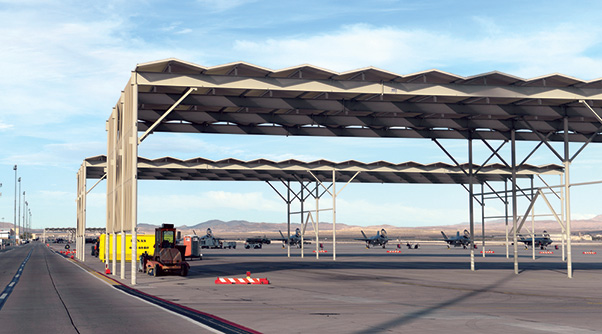 Sept. 30 marked the end of the fiscal 2016 at Nellis Air Force Base, Nev. Members of the 99th Comptroller Squadron and 99th Contracting Squadron put in tireless hours throughout the week to close the fiscal 2016 budget. The F-35 Lightning II sunshade project was one of the larger contracts for the 2016 fiscal year.

NELLIS AIR FORCE BASE, Nev. — Sept. 30 marked the end of the 2016 fiscal year. Members of the 99th Comptroller Squadron and 99th Contracting Squadron worked long days and nights throughout the final weeks of September to close out the fiscal year budget for both Nellis and Creech Air Force Bases.

The combined budget for Nellis and Creech Air Force Bases, the Nevada Test and Training Range, and 52 tenant units was around $565 million.
“For 99th CPTS, fiscal year end translates into closing our books and spending money as efficiently and effectively as possible to so we can meet mission requirements,” said Erin Willet, 99th CPTS budget analyst.

Collaboration and teamwork are vital in meeting the close out date of Sept. 30. Leadership works closely with their resource advisors to identify unit level requirements, both forecasted and as they arise, which are then captured on funding documents; from there, 99th CPTS reviews the documentation and certifies that funding is available. During close out, certifying funds availability becomes tricky due to lags in the accounting system and the sheer volume of last minute requirements and contracts that are processed. The complete requirements package is given to 99th CONS who then awards the contract. Post contract award, resource advisors, the budget team, and the contracting officer(s) work together to ensure funds are obligated by Defense Finance Accounting Service and the contract is executed correctly.

Maintaining open communication between the two squadrons contributes to their success throughout the fiscal year, but especially during close out.

“We have a great working relationship with the comptroller squadron,” said Capt. James Gallagher, 99th CONS contracting officer. “Inevitably, there are efforts that require administrative contract modifications. Finance is the conduit to making sure we properly obligate funds. There’s a mutual understanding of the responsibilities, and definitely respect and trust in each other’s abilities as Air Force acquisition professionals.”

The 99th CONS motto is buy, fight, win. Some efforts can be put on contract quickly; others require months of preparation from all parties involved.
One of the larger contracts awarded in the final days of fiscal year 2016 was the close air support requirement for the 6th Combat Training Squadron, who trains Joint Terminal Attack Controllers and Air Liaison Officers. The work on this contract started back in February.

“For our close air support contract, we went out to industry, studied it and found that this is not something that is offered to the commercial marketplace,” said Gallagher. “Because of that we determined that it was a non-commercial service and a service that is not offered to the public and therefore it drove a different set of contracting procedures which are lengthy and complex in nature.”

According to Gallagher, JTAC and ALO students were historically sent back to their unit without the required training that they needed. They weren’t able to get all the live controls with the aircraft here and would have go on temporary duty (TDY) to different fighter wings to fill the gaps in their curriculum.

“We hired their own dedicated contracted air, per say, and it allows them to complete their training syllabus and training requirements here,” said Gallagher. “Through contract support we were able to provide JTAC qualification training which is a big need for the Air Force and is the type of training the warfighter needs.”

The 99th CPTS ensures that money from the budget is allocated to fund requirements so 99th CONS can proceed with contract award and deliver mission essential services.

“Sunshades protect our assets,” said Willet. “They enable the longevity of our aircraft by protecting them from the elements. They’re also a safety risk reduction for our Airmen on the flightline by giving them a little relief from the sun. For the SIPR upgrade, it’s a modernization to an existing structure basically bringing it up to date. It’s giving them the latest and greatest in terms of secure connectivity.”

The 99th CPTS ensures that money from the budget is allocated to fund the requirements throughout the fiscal year.

As the close out for this fiscal year wraps up, the work on next year’s budget begins right away.

The 99th CPTS and 99th CONS worked hand-in-hand to ensure that all requirements were fully funded and contracted properly before funds expired at midnight on Sept 30.

“Our mission is to fund the fight,” said Airman 1st Class Adrien Gilbert, 99th CPTS budget analyst. “This part of the job makes sure there is money to take care of our jets and provide all of the support that is needed around base.”