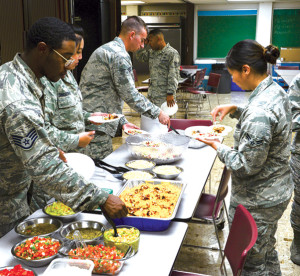 Airmen take part in the Hispanic Heritage Month lunch at the Chapel at Nellis Air Force Base, Nev., Oct. 1. From Sept. 15 to Oct. 15 it was National Hispanic Heritage Month and was a time to recognize the contributions made and the important presence of Hispanic and Latino Americans to the United States and celebrate their heritage and culture.

NELLIS AIR FORCE BASE, Nev.—Sept. 15 to Oct. 15 was National Hispanic Heritage Month and was a time to recognize the contributions and important presence of Hispanic and Latino Americans to the United States.

“It is a time where we pay tribute to past and current generations of Hispanic Americans who have positively influenced and enriched our nation and society,” said Staff Sgt. Jayson Perez-Morales, 823rd Maintenance Squadron aircraft fuel systems craftsman. “The list is long, from entertainers and sports stars, to civil rights activists and members of congress.”

Several events were hosted on Nellis AFB that celebrated the histories, cultures and contributions of American citizens whose ancestors came from Spain, Mexico, the Caribbean, and Central and South America.

“It’s a month to bring forth those of Hispanic heritage to those who don’t have that information and [make] them aware of the great strides that people of that heritage have made throughout the military,” said Tech Sgt. Alberto Hernandez, 823rd MXS NCO-in-charge of fuel systems repair.

Some of the events that happened through the month, included an inaugural 5K run, informational booth that displayed pictures of individuals of Hispanic heritage and their accomplishments in the military, a potluck of Latin food, education and cultural event at the Youth Center and a Hispanic Heritage Month Luncheon at The Club on Nellis AFB.

“Throughout each event we just tried to delve into giving people some information about the history because some people tend to not know some of the struggles that people of Hispanic heritage have gone through, so it’s just about showing that group of people some regard and respect,” said Hernandez.

Today’s military is ethnically and culturally diverse in nature and being able to celebrate different cultures gives individuals the chance to become more knowledgeable.

“For me, it’s always been important to celebrate diversity,” said Staff Sgt. Jayson Perez-Morales, 823rd MXS aircraft fuel systems craftsman. “It’s an opportunity to learn and understand the dynamics of different cultures, and ultimately it leads to better communication, specifically in the military. We all come from different walks of life to defend this great nation and the freedoms it provides, and I feel like getting to know how different groups of people socialize is important for personal growth, and I feel it enhances mission effectiveness.

“My Family mostly resides in Puerto Rico, but growing up a Navy/Marine Corps brat, I experienced a lot of diverse environments within my own culture and others. Latin American culture as a whole grew from a melting pot of different people from all over Europe/Africa, and indigenous people such as the Aztecs, Mayans, Incans, and Tainos.”

According to Hernandez, being able to have and celebrate diversity in the military ultimately brings people together, regardless of what their cultural background is, and strengthens the mission. No matter what one’s heritage is, it intertwines with being an American and that’s the most important thing.