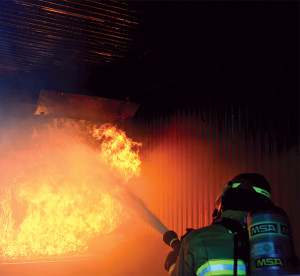 Firefighters assigned to the 99th Civil Engineer Squadron Fire Protection Flight, extinguish a controlled fire during a training exercise Sept. 23 at Creech Air Force Base, Nev. During the burn, the firefighters were accompanied by three distinguished visitors.

CREECH AIR FORCE BASE, Nev. — When it comes to fire protection and emergencies, Nellis and Creech Air Force Bases rely on trained specialists, prepared for anything. The men and women of the Fire Emergency Services department have risen to the challenge and they’ve earned the awards to prove it.

The unit, also known as the 99th Civil Engineer Squadron Fire Protection Flight, was recently named as the 2015 Department of Defense Fire Department of the Year, in the Large Base category, and DOD Fire and Emergency Services Fire Prevention Program of the Year.

“Nellis AFB is very busy with 171 assigned aircraft and 48,000 sorties a year, even planes from all over the world [come here],” said John, 99th CES fire chief. “Then there’s Creech executing a mission day in and day out, eliminating enemy targets.”

“When we’re out there doing the job, we’re not looking for credit, but it’s nice to be recognized for it,” said Rob, 99th CES Fire inspector. “The fact that both our prevention and operation sides of the house are being recognized for their work speaks for itself.”

“Every building, every plane, and every person on these two bases are our responsibility,” John said. “When you look at the Air Force mission and then you look at the mission at Nellis and Creech, you’re hard pressed to find another place whose missions are as important or as unique as ours.”

“Our first priority is life safety,” said Senior Airman David, 99th CES Fire Protection Flight member. “We constantly train and pull 48 hour shifts at the fire station so we can stay ready to respond 24/7. We practice live burns, take out our equipment, practice [operating with] them, and we never go into fight a fire alone. All of that training is the reason our firefighters are so effective.”

The flight recently had a chance to demonstrate a hands-on live burn training exercise to a few distinguished visitors.

“We didn’t just bring them to show off our Airmen, we did it to show our leadership how important it is that we keep the fire departments operating with all the right equipment to do the job,” John said.