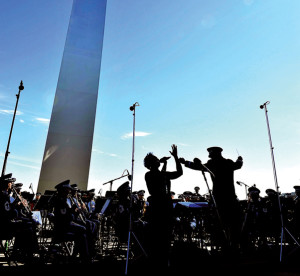 The Air Force celebrates the 10th anniversary of its memorial during a ceremony in Arlington, Va., Oct. 14. Air Force senior leaders spoke during the ceremony paying homage to veterans who paved the way.

WASHINGTON — For the last decade, the Air Force Memorial stood boldly in the skyline of the nation’s capital, inciting pride and honor, and recognizing the dedication and sacrifices of Airmen who have served.

Members of industry, Airmen and media attended a ceremony in celebration of the monument’s 10th anniversary under its spires in Arlington, Virginia, Oct. 14.

Depending on one’s perspective, the towering memorial — made of three spires reaching 270 feet — can symbolize the Air Force core values, a bomb burst maneuver or the three of four planes performing a missing man formation.

Air Force senior leaders spoke during the ceremony – themed “past, present and future” – paying homage to veterans who paved the way, those who are currently serving, and the Airmen of the future.

Air Force Secretary Deborah Lee James, who was also named an honorary Tuskegee Airman at the event, spoke to the bright future of the Air Force.

“Airmen of today and those of tomorrow are all standing on the backs of the giants of the past,” James said. “It’s now up to all of us, and those who follow us, to preserve and carry forward that legacy into the future, and that is precisely what we will do.”

According to Air Force Chief of Staff Gen. David L. Goldfein, the Airmen of today stand watch for America across the globe, delivering global reach, global vigilance and global power.

“Standing watch … is what we do,” he said. “So, how appropriate that this powerful, moving memorial stands watch over our fallen at Arlington Cemetery.”

The solemn place to honor the pioneers of the past inspired Chief Master Sgt. of the Air Force James A. Cody to reflect on the freedom it represents.

“It is truly an honor as you think about celebrating the history of it all,” he said. “You think about two brothers with big dreams at the turn of the 20th century to the Doolittle Raiders, to the Tuskegee Airmen, to all the legends who have gone before us and shoulders we stand on that make this Air Force so great.”

Since its dedication, over 2 million people have visited the memorial in reverence of tradition, heritage and esprit de corps, stated the memorial’s director.

“The Air Force memorial is a living, breathing monument,” said retired Chief Master Sgt. Barbara Taylor, the Air Force Memorial managing director. “This isn’t something you just drive by and say it’s nice; it is a place where Airmen come to celebrate Airmen.”

From history to resiliency, the majestic site is in the crossroads of heritage and the future, inspiring today’s Air Force mission.

“The spires of our memorial reach to the sky, just as our Airmen reach for the sky everyday as we fly, fight and win,” James said.