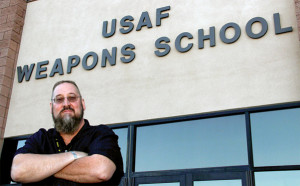 NELLIS AIR FORCE BASE, Nev.—The new squadron commander pauses in the delivery of his speech at the change-of-command ceremony. He searches the crowd until he finds a person standing in the back of the aircraft hangar.

“Goose!” he shouts. “I am so happy you’re the man in charge of scheduling here at the school. You are the backbone of this place. I look forward to working with you again.”

All heads turn toward the man the commander called “Goose.” Timothy Geist is hard to miss. He towers over the people around him at a height of 6 feet 5 inches. At the moment, though, Geist seems less imposing than usual. His long beard rests on his chest as he dips his crew cut–crested head. His cheeks glow red at the sudden attention.

Geist’s efforts as the chief of flight operations at the U.S Air Force Weapons School help keep the school running smoothly and recently earned him the Air Combat Command Civilian Program Specialist of the Year Award.

Managing flight operations at the Weapons School requires the organization, cool decisiveness and diplomacy of a traffic cop. Every day, Geist stands in the swirl of aircraft and personnel movement, taking in information quickly and redirecting the flow. He and three civilian schedulers, Amanda Ferris, Randall Faltinosky and Regis Ashley, function as a team to help squadrons accomplish their training goals.

“We work every MDS [mission design series] in the Air Force,” said Geist. “Working with 24 syllabi, we schedule all departures from Nellis, where they’re going, what they’re carrying in terms of weapons, and what time they’re coming back. We also work to get the appropriate Nevada Test and Training Range time that the units need for training.”

“[Geist] manages the most complex peacetime scheduling operation in the Air Force,” said Lt. Col. Jon Berardinelli, A3 deputy director at the U. S. Air Force Warfare Center. “He is also responsible for taking care of every visiting unit that supports the Weapons School. He supervises scheduling operations for anywhere from 15 to 20 units at any given time.”

In 2015 alone, Geist scheduled 6,300 missions and 8,300 flying hours, said Berardinelli. Because the Weapons School has to share scarce resources, such as NTTR time, Geist said he relies on relationships to effectively negotiate requirements.

“The Nellis and Creech Air Force Base scheduling community has weekly and monthly meetings with all the schedulers,” said Geist. “At those meetings, we fix challenges like NTTR conflicts. We talk it out and make deals in a number of ways. You can’t be argumentative. The school’s leadership places a lot of responsibility on me and my team to be their voice.”

“[Geist] has all the corporate knowledge and expertise for how to fit the pieces together for all the squadrons and groups around the school to make it all happen,” said Lt. Col. David Chadsey, 66th Weapons Squadron commander. “But, it’s not just his airspace scheduling that makes him the school’s backbone.”

“With his background as a prior Air Force weapons loader, he knows the maintenance side of operations and how munitions work, so he uses that,” explained Chadsey. “It’s particularly helpful for the 66th WPS because we drop so many live weapons every class. He’s very effective as a liaison between us and the maintenance units.”

Geist’s voice, a low rumble of thunder, vibrates with laughter when he recalls one of the early lessons he learned about the importance of being meticulous in his job.

“When I first started, the A-10 Thunderbolt commander came to me one day and asked why his jets had 500-pound ‘cement pieces’ on them instead of live bombs,” said Geist. “I pulled the schedule out to double check what I’d put into the scheduling system. I had input ‘l-14’ instead of ‘L-14’ for live bombs. The lower-case ‘l’ had been misunderstood as a lower-case ‘i,’ which meant we got inert 500-pound bombs—not for one day, for the entire week! I learned a lesson very quickly that day. Attention to detail is a must.”

Now that he has 11 years of training and experience, Geist’s mastery of his job and hard work garner praise. He said he would not be able to accomplish everything that he does without his team and the love and support of his wife of 23 years, Verna.

External rewards, such as the recent ACC award, are nice, he said, but he values most the satisfaction he gets from knowing he has helped others.

“I believe in what we do here,” said Geist. “The things that our staff and graduates do for the nation is amazing. They make the Air Force better and bring kids home from combat back to their families. It’s a great place to work.”