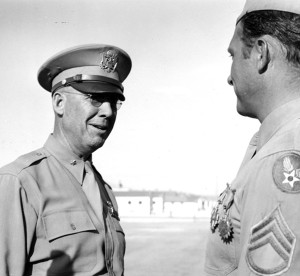 If there was one person whose contribution was key to the success of the Las Vegas Army Gunnery School, that might have be Lt. Col. (later Brig. Gen.) Martinus Stenseth.

Stenseth arrived in Las Vegas in early May 1941 as the base was just starting to take shape and built it up to operational status as the first of what would be eight Army aerial flexible gunnery schools. He and his instructors and staff turned out almost 60,000 trained gunners in just over three-and-a-half years of operation.

After a short stint as a sergeant along the Mexican border in 1916 with the Minnesota National Guard, Stenseth joined the Army and trained in Ohio and France as a pilot during World War I.

In just 10 weeks of combat, he had six individual and two shared aerial victories, earning the Distinguished Service Cross and Silver Star. After post-war service in the Baltic with the Relief Commission, he returned to the U.S. and by 1920, was a pilot in the Regular Army.

Between 1920 and 1940, he flew along the Texas-Mexican border, supported National Guard and Reserve aviation units in the Midwest, attended Air Corps Tactics School, served on staff in Washington, D.C., and commanded 2nd Observation Squadron in the Philippines. He then served in staff and command positions in pilot training at Randolph Field near San Antonio, Texas, before serving as a military attaché in the Baltics and Finland in the early days of World War II, then moving to Moffett Field in Sunnyvale, California, as an administrative inspector.

Then Lieutenant Colonel Stenseth arrived in Las Vegas early May 1942, first setting up shop in the basement of the Las Vegas Federal Building (now the Mob Museum) as construction at the Las Vegas Air Corps Gunnery School was not very far along.

By July 1942, the first buildings were complete enough to provide living quarters and some work spaces. Also, the first AT-6 and B-10 aircraft were assigned. His job was to build a school and a base from scratch.

Stenseth had been entrusted with a major task; the Air Corps had never had a gunnery school. Except for one squadron of YB-17s in the late 1930s, there were no true heavy bombers requiring professional gunners, yet the Army Air Force would build up to 90 combat groups of B-17s and B-24s by its peak strength in late 1944 with each squadron needing more than 100 gunners, plus flight engineers and radio operators also trained in gunnery.

Early on, he and Wing Commander Charles Beamish of the Royal Air Force visited the Royal Canadian Air Force gunnery training school at Mossbank, Saskatchewan to get some training ideas, but most of the equipment and training was devised locally over the next year.

Starting with a test class in December 1941, right after the attack on Pearl Harbor, regular training started in January 1942. After ground school, students were initially shooting from the rear cockpit of an AT-6; it was December 1942 before B-17 aircraft were available. All through the war, there were continuous improvements in training classes and equipment.

In early 1945, the school changed over and trained B-29 gunners, using modified TB-24 aircraft.

He was promoted to colonel in January 1942 and brigadier general in April 1943, then organized the 36th Training Wing in Victorville, California. He returned to Las Vegas in December 1943, commanding the 82d Training Wing, overseeing the gunnery schools at Las Vegas, Kingman and Yuma, Arizona.

In April 1945, he was reassigned to Keflavik, Iceland, as commander, Iceland Base Command, through December 1945.

With the post-war drawdown, he spent the rest of his career in Air Inspector/Inspector General positions at Offutt AFB, Nebraska, and Kelly AFB, Texas. He retired in his highest grade held, brigadier general, effective June 1950. Never married, he returned to Las Vegas to live, while spending summers in Minnesota with his sisters and their families until passing away on June 23, 1979.

In 1980, shortly after his death, the Nellis AFB Base Operations building, originally the pre-war Western Air Express passenger terminal, was named in honor of Stenseth and remains so to this day.