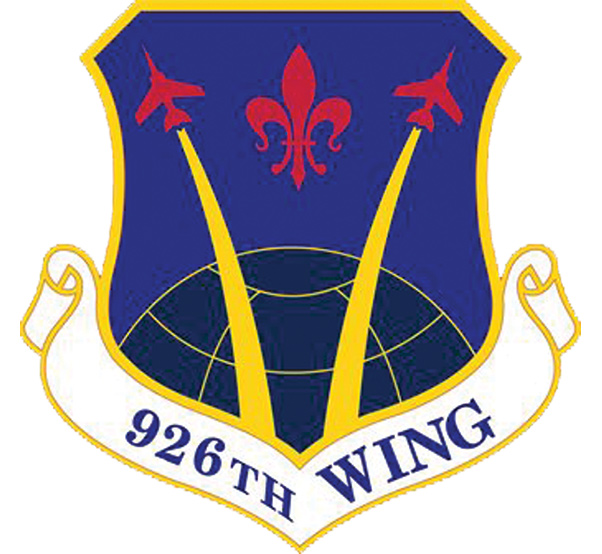 The 926th Wing is an Air Force Reserve unit under 10th Air Force, Naval Air Station Joint Reserve Base, Fort Worth, Texas. The wing is located at Nellis Air Force Base, Nevada, as an associate unit to the United States Air Force Warfare Center.

Through Total Force Integration, reservists are integrated into regular Air Force units, accomplishing the USAFWC and 432nd Wing/432nd Air Expeditionary Wing at Creech AFB, Nevada, missions side by side with active duty Air Force personnel on a daily basis.

Through TFI, the 926th WG provides combat-ready reservists to the USAFWC as sustained expertise integrated at the operational and tactical levels of warfare. It continuously conducts combat operations, operational test and evaluation, tactics development and advanced training to forge the tools required to fly, fight and win.

In 1967, the unit designation was changed to the 926th Tactical Airlift Group, reflecting broader airlift capabilities to include transporting equipment and supplies for deployments worldwide.

In October 1972, members of the 926th TAG flew two C-130 aircraft into South Vietnam as part of the Air Force-wide program designed to provide the South Vietnamese with increased cargo capability before the war came to an end.

In 1977, the Air Force announced the 926th TAG would convert to the A-37 Dragonfly fighter aircraft, bringing with the conversion a combat mission and a new designation, the 926th Tactical Fighter Group.

The 926th TFG continued to fly the A-37 until June 1982 when the group completed a conversion to the A-10 Thunderbolt II.

When Iraq invaded Kuwait in 1990, the 926 TFG began deploying people in support of Operation Desert Shield. Then, in December 1990, approximately 450 members of the 926th TFG were recalled to active duty in support of Operation Desert Shield/Desert Storm as the nation’s first Air Force Reserve combat unit recalled to active duty.

In February 1992, the unit was re-designated as the 926th Fighter Group. The name change reflected the deactivation of the Tactical Air Command. The group began conversion to the F-16 Fighting Falcon which was complete by October that year. Two years later, on October 1, 1994, the unit officially became the 926th Fighter Wing.

In 1995, the Pentagon announced another conversion — the 926th FW would convert to the A/OA-10 Thunderbolt II aircraft. The conversion was completed and the unit became combat-ready in September 1997.

In the late 1990s, the 926th FW participated in deployments patrolling the no-fly zones over Iraq in support of Operation Deny Flight, Operations Northern and Southern Watch, and in 1999 returned to Kuwait to participate in Aerospace Expeditionary Force One.

After the terrorist attacks of September 11, 2001, members of the 926th FW were mobilized and deployed to various locations worldwide in support of Operations Enduring Freedom and Noble Eagle.

In 2005, the Base Realignment and Closure Commission identified the 926th FW for closure with personnel and aircraft relocating to four bases. The damage caused by Hurricane Katrina accelerated the process from two and a half years to nine months. By the spring of 2006, the A-10s transferred to Whiteman AFB, Missouri, and Barksdale AFB, Louisiana, logistics readiness support moved to Buckley AFB, Colorado, and the command element moved to Nellis AFB.