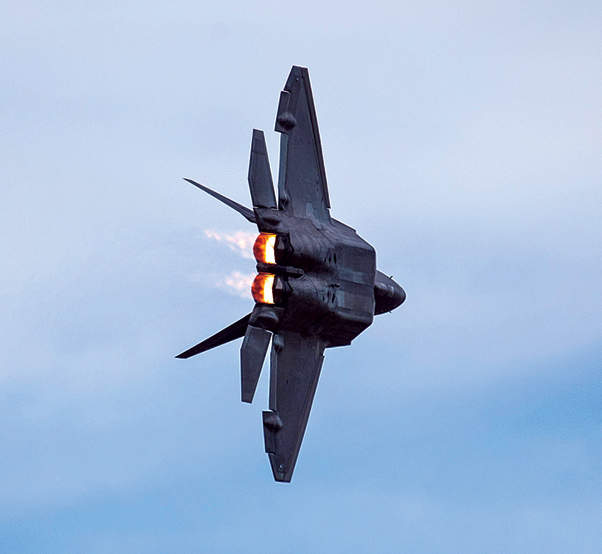 The team also teams up with Air Force Heritage flight exhibiting the professional qualities the Air Force develops in the people who fly, maintain and support these aircraft.

The F-22, a critical component of the Global Strike Task Force, is designed to project air dominance, rapidly and at great distances and defeat threats attempting to deny access to our nation’s Air Force, Army, Navy and Marine Corps. The F-22 cannot be matched by any known or projected fighter aircraft.

Advances in low-observable technologies provide significantly improved survivability and lethality against air-to-air and surface-to-air threats. The F-22 brings stealth into the day, enabling it not only to protect itself but other assets.

The F-22 engines produce more thrust than any current fighter engine. The combination of sleek aerodynamic design and increased thrust allows the F-22 to cruise at supersonic airspeeds (greater than 1.5 Mach) without using afterburner — a characteristic known as supercruise. Supercruise greatly expands the F-22 ‘s operating envelope in both speed and range over current fighters, which must use fuel-consuming afterburner to operate at supersonic speeds.

The sophisticated F-22 aerodesign, advanced flight controls, thrust vectoring, and high thrust-to-weight ratio provide the capability to outmaneuver all current and projected aircraft. The F-22 design has been extensively tested and refined aerodynamically during the development process.

The F-22s characteristics provide a synergistic effect ensuring F-22A lethality against all advanced air threats. The combination of stealth, integrated avionics and supercruise drastically shrinks surface-to-air missile engagement envelopes and minimizes enemy capabilities to track and engage the F-22. The combination of reduced observability and supercruise accentuates the advantage of surprise in a tactical environment.