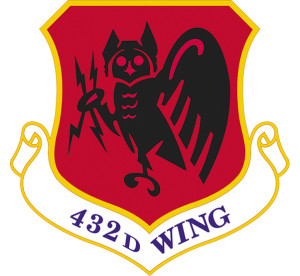 Today, Creech Air Force Base, Nevada, is home to the famed “Hunters” of the 432nd Wing and 432nd Air Expeditionary Wing.

The 799th Air Base Group, a geographically separated unit of the host 99th Air Base Wing at Nellis AFB, Nevada, supports the missions of these and other tenant units at Creech.

Creech Air Force Base arose from a small training site that grew in the aftermath of the brutal Dec. 7, 1941, aerial attack on Pearl Harbor, an event that thrust America and the newly organized U.S. Army Air Forces into World War II.

Envisioned as a simple sub-post “tent city” military training camp, by March 1942 three graded-earth landing strips with taxiways were in place and additional plans underway to construct more permanent fixed facilities that included an auxiliary landing field for the parent Las Vegas Army Air Field. In the following seven decades the installation’s roles and missions focused on such a sudden call to duty–preparing Airmen for direct combat and support as part of an unwavering service to the nation.

Before the end of 1942, the Army had a contract for regular facilities there. By February 1943, the camp saw use as a divert field and as a base for air-to-air gunnery training. Later that summer, after the establishment of a four-engine ground training school for B-17 co-pilots, the airport’s full complement of aircraft included 29 B-17s, 18 TC-26s and six AT-61 trainers. In early 1945, as World War II began to wind down, so too did the missions at Indian Springs, and at year’s end the installation was in stand-by status with maintenance by a small housekeeping staff. As part of the post-war drawdown, both Indian Springs Airport and Las Vegas Army Air Field (todays Nellis AFB) inactivated in January 1947.

Along with Las Vegas Army Air Field, Indian Springs Airport reopened in January 1949 after the birth of an Independent Air Force and the onset of the Cold War. Assigned to Air Training Command, the major command redesignated the field Indian Springs AFB as the site prepared for the arrival of its first permanently assigned Air Force unit in 1950. A renewal of airpower innovation and tactics in the new service during the Korean War left its mark on Indian Springs AFB. In July 1952, the base transferred to the Air Research and Development Command and realigned under the Air Force Special Weapons Center in Albuquerque, New Mexico. After the 3600th Air Demonstration Team “Thunderbirds” moved to Nellis AFB in June 1956, the Indian Springs airfield became their primary air demonstration practice site.

In 1961, control of the installation at Indian Springs shifted to Tactical Air Command. The base’s myriad of roles throughout the 20th century belied its size and resources. A successive string of host and tenant organizations, ranging from groups to detachments, provided support to on- and off-site missions. Critical but little known responsibilities included support to the Continental Nuclear Test Program and service as a key staging base for the delivery of testing materials to the Soviet Union for joint verification tests. The base’s proximity to such remote but essential locations led to the arrival of its most distinguished visitor on Dec. 8, 1962, as President John F. Kennedy arrived at Indian Springs AFB before proceeding by helicopter to the Nevada Test Site for an inspection of those facilities.

On April 13, 1964, the Air Force redesignated Indian Springs AFB as Indian Springs Air Force Auxiliary Field and assigned it to Nellis AFB. During this era the base had two enduring and well known roles. It provided range maintenance for sections of the huge Nellis Test and Training Range. Concurrently, it served as a recurring host base for deployments by Airmen and aviators from all the services in search of realistic, less constrained field training. Despite these vital and persistent contributions to critical missions and the development of air superiority, the base acquired no singular operational mission of its own. A detachment of UH-1N helicopters in the 1970s and 1980s constituted the only aircraft unit assigned to the installation.

Following the inactivation of Tactical Air Command in 1992, Indian Springs AFAF fell under the new Air Combat Command. A new era began Dec. 13, 1996, with the first flight of the RQ-1 Predator remotely piloted aircraft at the airfield. In a defining moment of history, on the Nellis AFB Range, the Predator conducted the first successful firing of a Hellfire missile in February 2001. This transformation of a reconnaissance platform into an offensive weapon would, in a few short years, transform Indian Springs from a center of support to a center of operations reaching far beyond the horizons of the Nevada desert.

On June 20, 2005, with the transfer of the remotely piloted aviation mission to Indian Springs growing rapidly, the U.S. Air Force redesignated Indian Springs AFAF as Creech AFB in honor of Gen. Wilbur L. Creech. Naming the installation for General Creech, commander of Tactical Air Command from 1978 to 1984, and a veteran of more than 275 combat missions in Korea and Vietnam, was all the more fitting given his unofficial title as the “father of the Thunderbirds.” A fearless pioneer, and commander of the Skyblazers Aerial Demonstration team that preceded the Thunderbirds, General Creech became a Thunderbird pilot and senior mentor.

On March 13, 2007, the arrival of the first MQ-9 Reaper at Creech marked another milestone in the base’s growing fleet of remotely piloted aircraft. The U.S. Air Force elevated the leadership of remotely piloted missions on May 1, 2007, with the activation of the 432nd Wing at Creech.
Establishment of the 432rd Air Expeditionary Wing at Creech on May 15, 2008, acknowledged the full spectrum of these operations. On Aug. 30, 2012, the 799th Air Base Group stood up to improve base operating support at the base. Then, on Dec. 5, 2014, the 726th Operations Group unfurled its flag at Creech in a direct reflection of the expansion and enduring importance of the total force alliance at the Hunters’ main operating base.

Today Creech AFB continues to engage in ongoing overseas contingency operations against terrorism as the birthplace of the global MQ-1 and MQ-9 remotely piloted aircraft enterprise.